By this point, we all know what to expect from “Marvel’s Avengers” tie-in comics to the upcoming game. They are competently executed one-shot stories with very little creative inspiration. Sometimes, when we are (well, when I am) lucky, we get appearances from deep cut comics characters like Monica Rappaccini or Zzzax. A lot of that success has been due to the writer of the previous issues, Jim Zub, who is a steady hand who knows how to put together a comic book. In this issue, Paul Allor takes over writing duties and it’s a bit of an adjustment. 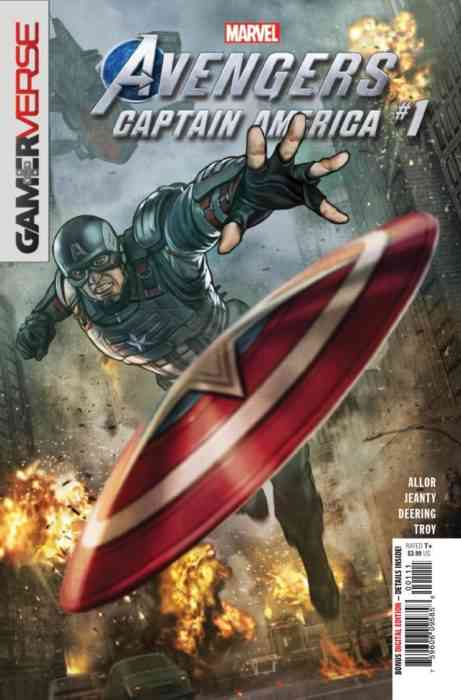 Part of me wonders if Allor is just writing this issue for the proverbial paycheck. What I mean is he’s a very good writer, but his heart does not seem to be in this issue. It’s as standard a Captain America story as you will find, down to Cap going to the funeral of a World War II buddy. (That’s a thing that happens a lot in these sorts of stories.) There’s actually not a lot of dialogue in the issue. What we’ve got a lot of are narrative captions. It’s economical, I’ll give it that, but it’s also redundant. A lot of times the pictures and the words are accomplishing the same thing.

In one WWII flashback sequence, Cap describes a German base he’s raiding. “Heavily armored, with scientists coming and going. Davis’ unit monitored the station for weeks.” This caption is over an image of Cap and his team parachuting into the base. The thing is, there’s a lot of ways this information could have been conveyed. We could have gotten a dialogue scene between Cap and Davis. Or we could have just seen the base and let the art explain its significance. Instead, we get close up shots of parts of the base, but never anything that conveys its significance to the story. We just have those words for that, and they’re kind of a snooze. That’s not great comic book storytelling. 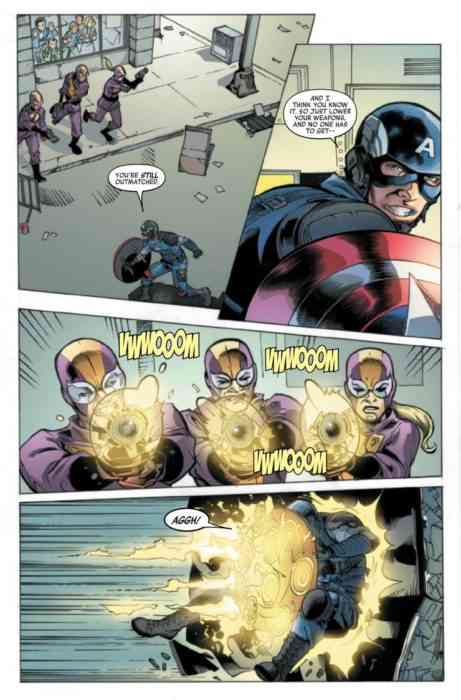 The artist on this issue is Georges Jeanty (hey, that’s the same name as the issue’s villain, Georges Batroc!) Jeanty is joined by inkers Marc Deering and Scott Hanna, and colorists Andy Troy and Chris Sotomayor. That’s a lot of cooks and usually that’s not a great sign to the artistic coherence of an issue. In this case that’s not really the problem, it more has to do with Jeanty being asked to work outside his comfort zone. Jeanty’s style is representational. Cartoony. His people are rounder and softer than you would find in real life. That’s not a bad thing; he used it to phenomenal effect in “Serenity: Leaves on the Wind.” Even though his characters didn’t look anything like the actors they were supposed to be, it was totally clear who everyone was. He got the important details, and in comics that often leads to a more memorable style.

Here though, he’s being asked to work within the style of the last few artists, who in turn are capturing the look of the upcoming video game, which is, of course, aping the style of the popular MCU movies, which in turn was based on the style of Bryan Hitch in the 2000’s “Ultimates” comics. Woof, that was a lot. My point is, Jeanty is being asked to draw bits and buckles and straps. Lots of fine details. The action takes place in a European forest and in New York’s Times Square — busy locations. But Jeanty thrives on making the simple say a lot. Here, the script calls for the opposite, and that’s a shame. He can’t really differentiate between the important details and the incidental stuff, making everything look busy. Your eye doesn’t know what to focus on. I don’t blame Jeanty, he’s got a really good core style, but this is what happens when one artist is asked to be a different artist. It never works, and the final product is worse for the effort.

There is a little bit of dialogue between Captain America and his foe Batroc the Leaper (or Batroc ze Lepair if you prefer, which I do.) Here, Paul Allor proves that he can handle some badass posturing, though your mileage may vary. “It’s not operational at the moment,” Cap tells Batroc when he points a prototype laser weapon at his chest. “Just like everything else in this room … Including you.” Cool? I thought it was kind of cool in a dumb Fast and Furious kind of way. It’s cheesy, and I liked it. Those were the moments that Allor’s experience writing “GI Joe” and “Ninja Turtles” came into play. He knows his genre.

Every one of these issues makes me question who they are for. This one is no exception; it’s even less connected to the overall story than the previous issues. Which makes sense, as this is the first one produced by a different writer. As a “Captain America” fan, you’ve seen this all before, and better, especially in the legendary Ed Brubaker run that introduced the Winter Soldier. As a newbie, this isn’t all that enticing. This doesn’t make me want to pick up the next issue. Maybe it’s for video game fans? Somehow I doubt that. But you, the reader, are presumably a video game fan! I’d love to hear how this comic struck you. And next time, we’ll be back with a story all about our favorite duplicitous superspy, Black Widow. See you then true believers!