A World Given to Bug and Beast: Music and Story in Hollow Knight

Music is a beloved, yet sometimes overlooked, part of the video games we love. From the iconic Gregorian chant of Halo, to the pixelated joy of the Mario games, it’s everywhere. Most times music is used to influence the player’s mood or express the feelings of the character. Yet sometimes, music provides so much more. It helps tell the story as it unfolds, guiding the player and giving hints to things that players may miss otherwise. So let’s talk about music and story. Specifically let’s discuss a game, and a composer, that masterfully weave music and story telling together in maybe one of the best ways ever implemented in a video game. 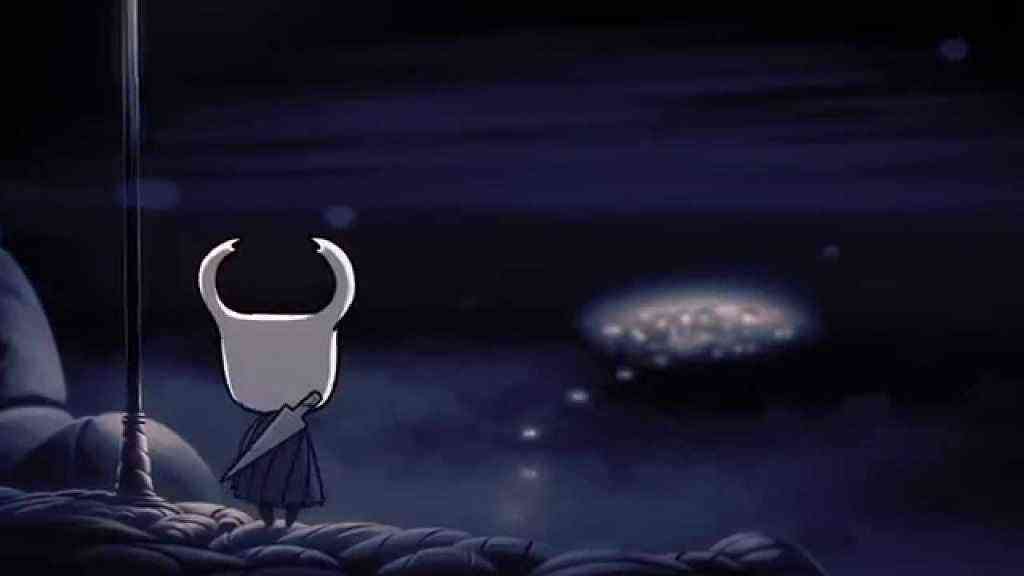 Of course, we are going to be analyzing the music of composer Christopher Larkin, and the story of Team Cherry’s Hollow Knight. Just to be clear, in no way is this piece a review of Hollow Knight’s gameplay. This is simply an analysis. How does Hollow Knight’s music create a clear connection to the story operating in the background? What does the music tell the player? And what techniques and sounds make this clear to us while playing? These are all questions that can be answered on the journey. To emphasize a point before we begin, this analysis will contain spoilers. This piece will be covering pieces of the entire story of Hollow Knight.

But without further ado let us descend into Hallownest. A kingdom of bugs and beasts. A kingdom filled with endearing characters and dark lore. Filled with beautiful music, that not only heightens emotions, but helps tell a story.

The kingdom of Hallownest is not one of bustling life. Not any longer. Instead it is an eerie, lonely, place ravaged by infection and wild bugs, amongst other things. The introduction of the game introduces you to Dirthmouth, the fading town, that rests above Hallownest. As the player enters the town they are met with boarded-up houses, scattered lamps, an old bug, and the wind. It’s obvious, without much direction to the player, that Dirtmouth is basically empty. Its inhabitants are almost all gone. It is a lonely place, and as your first introduction into the world of Hollow Knight, it carries a lot of weight.

In addition to the design of Dirtmouth, players do meet one more aspect of world building. Of course this is Dirtmouth’s theme, the music that plays as you enter this lonely town. Christopher Larkin provides a great deal with this melancholy track. The lonesome piano that starts the song reflects the town itself. Each rise and fall of the melody acts as a reflection of the once-lively town falling to ruin, a repetition that the player can feel as they walk the street. Larkin creates a story the player can feel; they aren’t told it, but they get a glimpse of what happened to this place before even entering Hallownest itself. 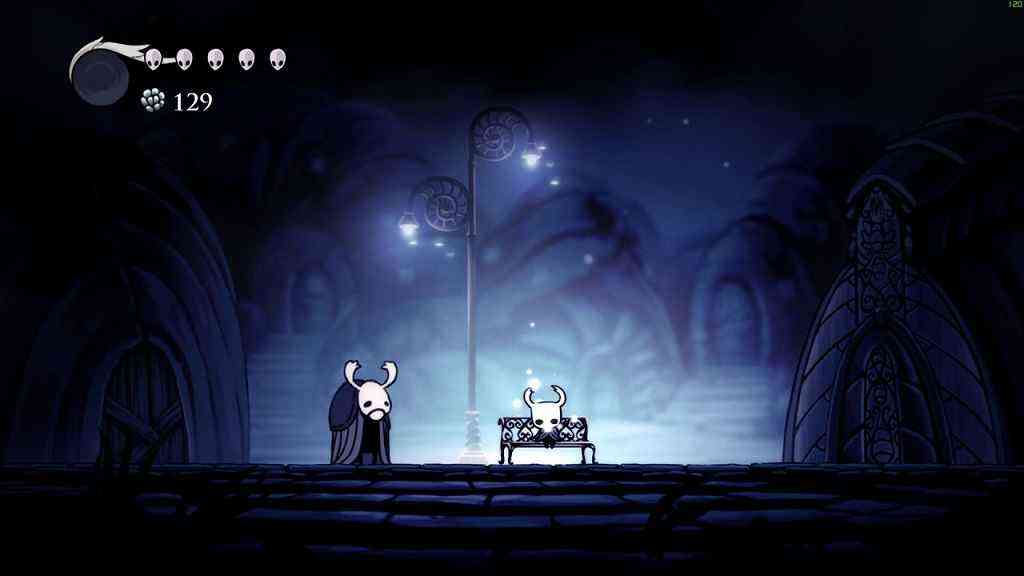 As Sam Goldner writes, in his article on Bandcamp, about Larkin’s score, “Layering a slow, sweeping string melody with distant harp and ghostly sound effects, Larkin establishes an air of mystery on “Crossroads”—or as he puts it, ‘a sense that there was once a prosperous kingdom here…but it’s no longer.'”

The track Goldner writes about is the third established track, Crossroads. It’s steeped in mystery and carries with it a sense of sad wonder. From the ghostly vocals, to the rising synths, it is as sweeping and sad as the kingdom it represents.

Carrying the Past:  Atmosphere, Emotion, and Motif

We see how Larkin’s composition displays the Kingdom of Hallownest to us. A lonely, desolate place that has been left to the hands of time. The lonely chords of Dirtmouth’s theme, and the mysterious and expansive theme of the Crossroads, deliver us an overview of Hallownest. Yet how does Larkin’s music and sound design develop and progress the atmosphere, as well as the story, of individual locations while carrying a consistent tonal theme? Two locations in the game particularly demonstrate this idea of emotional and atmospheric consistency. These locations are Greenpath and the City of Tears.

Larkin is a master of weaving emotional extensions across consistent melodies. The City of Tears theme is a perfect example. The main melody consists of only a few notes, but with a changing bass line and extensions layered over it the theme seems to shift as it plays. Yet what does this accomplish? 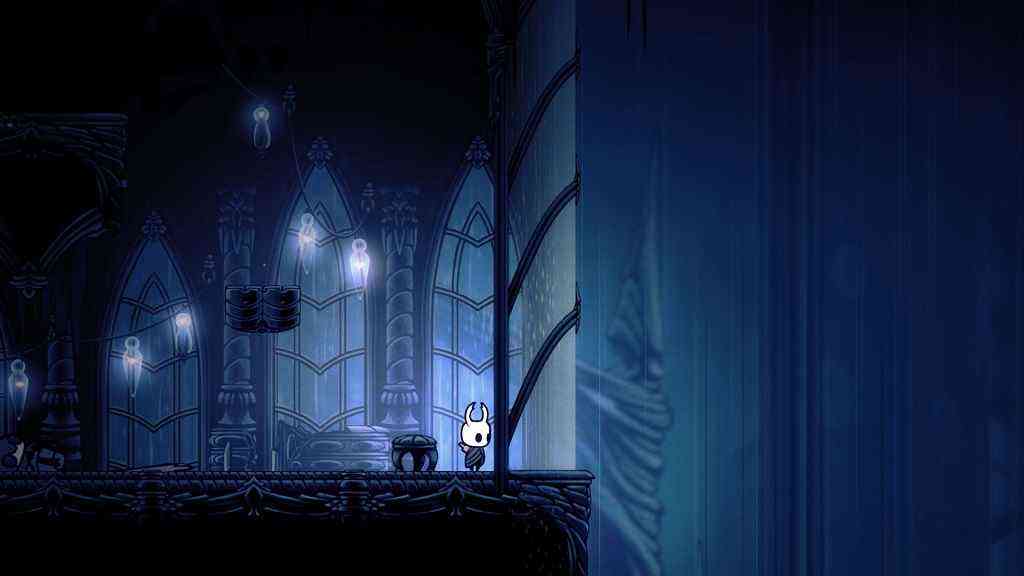 8-Bit Music Theory, in his YouTube video, says it best: “it’s these types of colorful notes that give this tune an emotional quality…City of Tears’ open, quintal, sound fit the beautiful ambiguity of the area.”

And it’s true. As the player wanders through the desolate city, rain pouring down around them, the location is enchanting. A haunting, yet somehow uplifting, theme playing around you gives the experience more impact. The atmosphere feels consequential, and alive, like you’re witnessing something bigger than yourself. Like this is where your quest was meant to take you.

Equally important as an example, is Greenpath. Greenpath represents an important implementation of motif. For those who are unaware, motif is a reoccurring sequence of importance within a musical body. Larkin uses motif excellently, to build atmosphere but also to tell story.

Does it sound familiar? It should. Larkin uses the Dirtmouth theme, from above, but adds extra layers to it. Why? Because Greenpath’s atmosphere demands it. We get the same sort of lonely theme that Dirtmouth displays to players at the start of the game. Yet, the theme is more alive and less somber. This is because, while the sadness of the fading kingdom persists, the Greenpath is alive and beautiful. A reflection of the tribe of bugs who live there, and an extension of the story of the kingdom.

The Pale King: The Theme That Makes the Game

The story of Hollow Knight is not straightforward. It is one that unfolds through exploration and through connecting elements that you have found throughout the adventure. The repetition of musical themes, of course, bears importance to connecting the story. We have seen, and heard, how Christopher Larkin helps build the world of Hallownest. How he paints ambience and atmosphere. Also, we have seen what repetition can do for a place like Greenpath.

Yet Larkin takes his ability to tell Hollow Knight’s story further still. Using the repetition of the Elegy of Hallownest (The King’s Theme), the first music heard in the game, Larkin ties characters and the storyline together seamlessly. Using melodic variation, he places the song strategically throughout the game in moments that would relate to the character of the Pale King.

For instance, as 8-Bit Music Theory points out in a different video, the importance of the theme connecting the White Lady and the Pale King. He explains that, “the connection between the two is further bolstered by her theme, which uses the exact melody from the Elegy of Hallownest.” 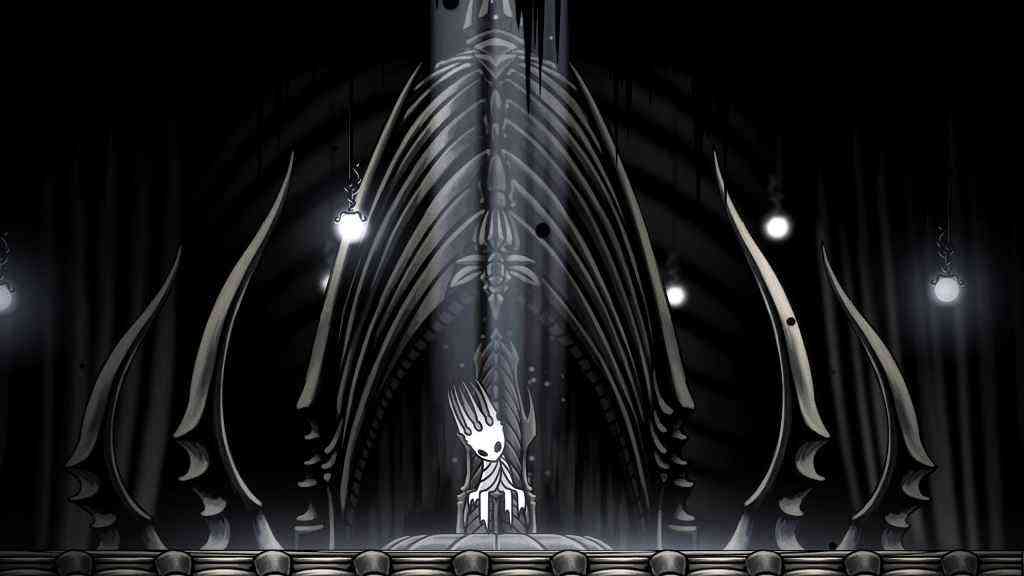 In the same way as the White Queen’s theme, the theme of the White Palace is a manipulated version of the King’s Theme. It is the way Larkin manipulates an overarching theme that he ties places, characters, and information together with music. In fact, on a first playthrough the player may not even realize the connections between the Elegy of Hallownest and the Pale King. Yet, the theme connects the two of them together. Through this connection players can begin to piece together the whole story. That realization that the poem featured at the very beginning of the game, is not just an elegy for a faded kingdom, but for a lost king. A connection made through a theme that, like a web, branches out and sticks things together. A pattern repeated, carried out through the places in your adventure through Hallownest, and brought home to understanding.

Conclusion: Not So Hollow

And so we arrive at the end of our journey through the music of Hollow Knight. Though there is so much more an analysis like this could touch on, the main point remains the same. The music of Hollow Knight is not just a collection of beautiful tracks meant to evoke emotion, though it is that. Hollow Knight’s soundtrack moves with the story. In addition it helps tell the story of the game. It connects places and characters, the ambience of a place to the storyline, and reveals the story further to those who listen.

So maybe, if you haven’t adventured to Hallownest in awhile, this will inspire you to undertake the adventure again. This time, go just as slowly as your first playthrough. Sit on the bench in Dirtmouth or look over the City of Tears. And listen. Who knows what you’ll learn about the game just by listening to the music. There could be more to discover. 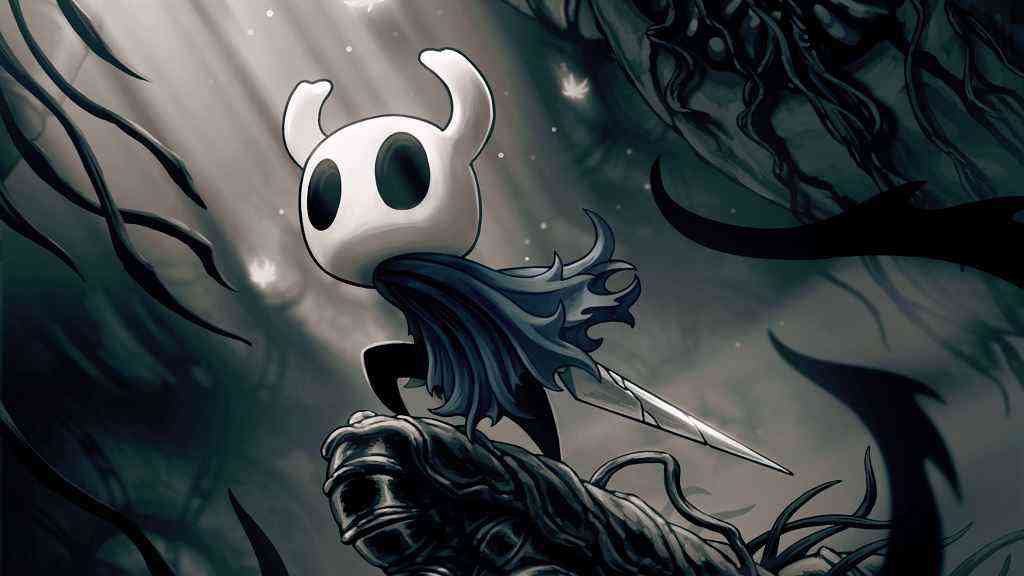