Halo Infinite Multiplayer: Tips and Tricks to Level Up Fast

Strategies to Level Up Faster in Halo Infinite

Halo Infinite is a hit. It seems largely unanimous across the games industry that 343i has struck a nice balance between classic Halo, and modernization. While the game continues to score mostly 9 & 10’s across review sites, many players still have one serious gripe about Microsoft’s newest blockbuster: the painstakingly slow progression system. Luckily, we at COG Connected formulated the perfect strategy to save your time and energy. There are 5 key strategies to level up faster in Halo Infinite.

As it stands, Halo Infinite’s current progression system is based on challenges that earn XP points to progress in a basic battle pass. Simple enough, but the execution is lacking. Many challenges require very specific in-game opportunities that, depending on matchmaking gods-that-be, can be very rare.

343i has made some slight changes since launch, incorporating an ever-present 50xp per-game reward, which was more recently beefed up to reward you much more for your first few games of the day before returning to 50. Despite these good-natured changes, the challenge system still has left many players frustrated and threatens Halo Infinite’s player retention. 343 still limits the number of weekly challenges a player gets, so finding a way to get the most bang for your buck out of the challenges you do get is important. 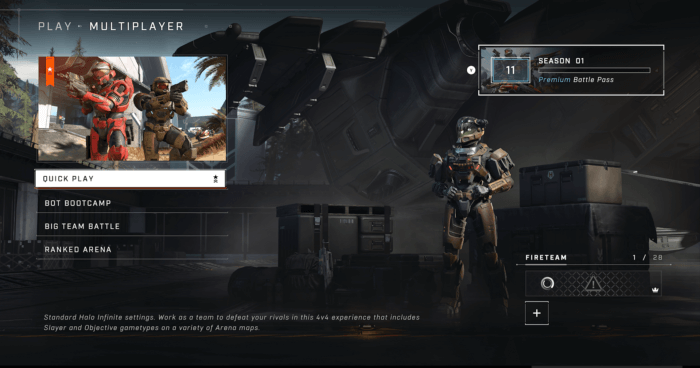 1. The Early Bird Gets the Space Worm

The two variables Halo Infinite affords players to use at their discretion, XP boosts and challenge swaps, are the key to capitalizing on the progression system. Distributed throughout the Battle Pass, XP Boosts double the amount of XP awarded for an hour in real-time. To best use these, players should stockpile these awards for the beginning matches of each day.

While it may be tempting to activate a boost instantly, applying the multiplayer to your first six matches (300xp, 200xp, 200xp, 100xp 100xp, & 100xp), for a max total of 2000xp guarantees players to at least progress a level and half in one sitting, since you are not likely to fit a full six matches perfectly within the hour of the boost. Additionally, while Big Team Battle can provide a hell of a time for your spartan, it may be worth it to stick with Quick Play matches while your boost is going. This will ensure you can apply the boost to as many rounds as possible.

If you’re unable to hold off on only activating one a day, timing the boosts to correlate with challenge completions is vital. By aiming to complete challenges within the boosted timeframe, players can quickly rack up XP. You should always try to be aware of your current progress in your challenges. Only one needler kill away from a completed challenge, but you haven’t activated your boost yet? Maybe work on that assist challenge and wait for the next game and complete both challenges with XP Boost working for you.

The second consumable Halo Infinite provides the players, challenge swaps, are an important part of getting the most out of a week’s worth of challenges. While your XP Boosts are ticking down, you need to complete as many challenges as you can in a single hour. Using challenge swaps to load yourself up with challenges that can be completed simultaneously in one playlist allows you maximize XP profit. This can be a dangerous gamble though since you can’t predict what your last swap will throw in your challenge set.

With so many weapon-specific challanges out there, players should familiarize themselves with what weapons spawn on what map, and where they spawn. Some weapons will take turns in the same spawn point depending on the round, like the Bulldog and Heatwave, while some weapons you’ll find on nearly every map no matter what, like the Commando.

Having a general idea of where to find weapons will help you knock out weapon-specific challenges with a little more ease. Additionally knowing if the weapon you need even spawns on the map you’re playing will help save time and effort scouring the playing field.

Out of the three current playlists available (Quick Play, Big Team Battle, and Ranked), Quick Play should be your go-to for most challenges. While some players can rack up huge numbers in Big Team, the close quarters of most Quick Play maps will keep feeding you enemy spartan more consistently than Big Team.

When going for challenges that include BTB specific game modes, or vehicle challenges, BTB is the obvious candidate here. While the occasional quick play map may have a vehicle appearance, you can’t beat the convenience of a consistent spawn. Not to mention 8 more enemies ready to be splattered.

The best way to level up faster Halo Infinite is to combine all of these strategies. The duel threat of map knowledge and well-timed consumables will get you that shiny set of armor you’ve had your eye on.  At least, faster than mindlessly hacking away at any challange you’re given and activating XP boosts willy-nilly.

It’s hard to argue that Halo’s progression system is good. However, it’s also important to show developer 343i patience while they continue to listen to their fanbase. Community feedback is important, and 343i has proven they are listening, but some Halo communities may have stepped a little far in the wrong direction.