I’ve had my eye on those fancy portable GAEMS “personal gaming environment” cases for several years now. I’ve had friends use them on a consistent basis and have heard nothing but fantastic things. For a few buddies, it became the main way they play games. I mean, what is not to like about a super briefcase with built-in high-performance monitor, a perfect storage area for your console of choice, and that you can fire up and play anywhere? If you travel a lot for work on the road or a professional hockey player, it’s absolutely perfect for high def gaming on the go.

While at E3 2019, I finally had a chance to chat with the fine folks at GAEMS and check out a badass “entertainment environment” they have planned for pro gamers and streamers alike. It’s certainly an innovative new product and one that comes in at a shockingly low price. In fact, I’m having a hard time believing they will actually be able to make a profit off that price, but more on that later.

GAEMS new system is called the Guardian Pro XP and just like other GAEMS units it comes equipped with a monitor. Not just any monitor. The Guardian has a built-in 24 inch, 60Hz monitor and it looks incredible. It kicks the crap out of any of the monitors I use at work and at home. This impressive beast not only has a pretty rad monitor but also comes with a full-fledged PC. Final specs were not revealed at E3 but they did say they want that PC to be able to run 4K gaming and streaming without a hitch. They reassured us it would be a powerful PC. 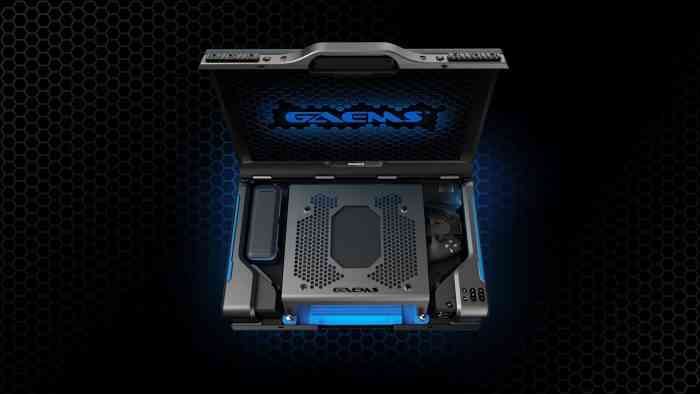 Granted, the Guardian is larger than the Vanguard and other GAEMS units but the trade-off is worth it. In addition to the PC and monitor, it has 9W speakers, a power amp, passive subwoofers, a surround processor power adaptor and, of course, all the necessary plug-ins and compartments.

I am not so certain the Guardian could handle a big drop on a concrete floor but the industrial-grade hard-shell case with metal-hinged design does give me some hope this puppy can take a beating.

Under the hood, the Guardian has an HDMI 1.4 input, 3.5 headphone jack, high-speed USB hub (from console power) to 3x USB ports (1x USB 3.0@1.8A & 2x USB 3.0@0.9A) duplicating console functions and providing passive power for charging while Guardian is off. Needless to say, it has everything you need to be able to take your gaming on the road.

There is no doubt; however, the Guardian was designed for streamers. With over 2 million of them on Twitch, there is certainly untapped potential. With streamers in mind, the Guardian has an external rear HDMI output for streaming and sharing monitor content. Also, a mounting system for cameras, microphones, lighting and other equipment used for streaming. Just keep in mind some of those accessories are sold separately. It is also compatible with the Xbox One S, Xbox One X, PlayStation 4 Pro, and PlayStation 4. So if you want to swap out the PC with your console, the Guardian has you covered. 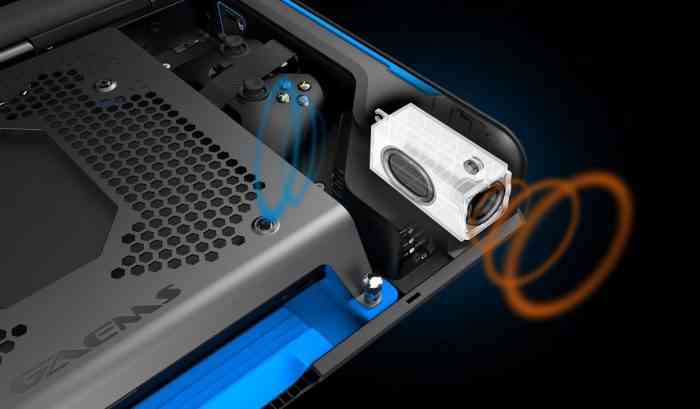 Successful streamers and content creators know they have to ‘feed the beast’ daily. So having the option to stream anywhere they go is ideal to maintain that audience and the views.

The Guardian will apparently be priced around $700 dollars; however, they did make it clear they have yet to finalize that price point. Not to mention the final specs for the PC have not been established, so who knows how much this thing could end up costing. That said, 4K gaming and streaming will be a must, so I am really curious where those final specs (and price) will land. As it stands, the monitor only supports 1080p, so it will be a hassle for folks to set up an external monitor unless you can upgrade to a 4K monitor.

Whether you are a YouTuber, Twitch streamer or content creator, the Guardian Pro XP is definitely something you’ll want to put on your radar. While the final specs and pricing have not been announced, there is plenty of room for optimism. GAEMS want this to be the must-have ‘personal gaming environment’ and so far it’s looking that way.

The Guardian Pro XP is expected to be available this summer. For more information, visit the Indiegogo page at https://www.indiegogo.com/projects/gaems-guardian-pre-perk-packs#/ and follow us on social media at Facebook, Instagram and Twitter to keep up with all the latest news.

Call of Duty: Vanguard & Warzone Season 2 Delayed
Next Is Crunch Mandated at Naughty Dog? The Answer Is a Bit Complicated
Previous The 8 Most Disappointing Games of 2019 so far…