Combat in Insomniac’s Spider-Man has far exceeded my expectations, and I’d already anticipated it to be as satisfying as Batman Arkham combat at the very least. Duking it out with goons as the acrobatic web-head has never been this fluid, versatile, and downright fun. That said, my first few tussles were a bit of a rude awakening. I wasn’t quite prepared for the unyielding ferocity of Spidey’s various enemies, and it required a bit of practice to get the hang of his numerous abilities and gadgets and how to use them to their utmost potential. Having earned the esteemed platinum trophy, I can confidently state that I’m a tried and true combatant and can do just about whatever a spider can. So, here are six tips to give you an edge over Manhattan’s worst as you get started.

Prior to spewing webs and breaking jaws, it’s critical to assess your surroundings and the bad guys awaiting you. If snipers are guarding a group of enemies, start with stealthily taking them out. The last thing you want to worry about is relentless sniper rounds fired at you while fighting ten or more crooks at a time. Initially, it’s not a bad idea to quietly remove as many enemies from the equation as possible before making a scene. Once they’re silenced, consider your environment. Are you in a warehouse, construction site, rooftop, or alleyway? Regardless, it’s key to make your presence known with a thundering boom.

2. Begin with a Bang

Try initiating the fight by boldly landing in the middle of the group with a ground strike. The immediate shockwave stumbles them for a few moments, giving you time to make your next move. If you’re on a rooftop, knock those suckers off the sides of the building with your concussive blasts. If a few thugs remain, send the rest flying with some swing kicks. Another fun way to rid rooftops of enemies is to launch them into the air and fling them straight down with your webs. If there’s a group in a condensed space, fire some web bombs, impact webs, and trip mines following your initial landing. Enemies will instantly stick to each other and nearby objects. That’ll deal with the majority of them; enabling you to finish the rest with style and elegance. 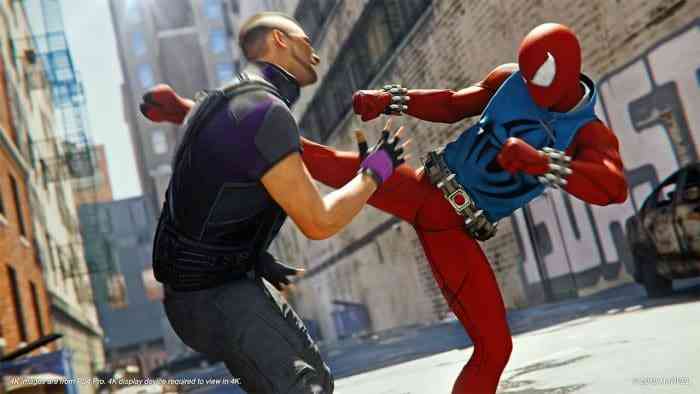 Let’s say you flub your entrance or it doesn’t play out as planned. Worst case scenario, you’re surrounded by guys with snipers, rocket launchers, and a myriad wielding other deadly weapons. All things considered, it’s just another day in the life of the wall-crawler. However, you’ll still be beaten down if you aren’t quick on your feet. That’s where Spidey’s most simple but most useful ability comes in: the web-strike. Tapping triangle fires a web directly at the enemy your looking at and sends you flying toward them for a swift succession of attacks. Whether you knock them out or only manage to land a few punches, web-strike quickly zips you all over the battlefield. If using the ability effectively, you shouldn’t ever need to run or swing toward an enemy. Mastering web-strike enables you to chain together your basic attacks, gadgets, and finishers with style and speed. This fundamental ability is the cornerstone of all Spidey’s abilities. I can’t recommend it enough.

I recommend upgrading Spider-Man’s primary web shooters as soon as you’re able. They’re more useful than ever before, and the higher capacity you have, the faster you can overcome your opponents. Don’t be afraid to spam these bad boys either, because they recharge at a considerable rate. If an enemy’s standing near a wall or large object, blast them without pity. They’ll quickly stick to the surface and remain out of your hair. The same goes for enemies you’ve knocked or thrown to the ground. Web em’ up before they have a chance to get up and take another swing. Your web shooters are also handy for temporarily disabling thugs with guns. There comes the point where there are several ways to deal with gun-toting bad guys, but merely nailing them with a ball of web or two helps in the beginning.

PlayStation Teases Spider-Man: Miles Morales For PC In New Trailer
Next 5 Things to do Other Than Playing the Main Story in Spider-Man PS4
Previous The Impressive Indies of PAX Rising 2018