I am a Civilization fanatic, and so I am very excited about the New Frontiers expansion. Though not an expansion pack in the traditional sense, New Frontiers is going to add new leaders, Civs, and gameplay features, in discrete little packs. As such, I am going to assess the content as it comes out, sharing my impressions of how the game is changing. If you too cannot escape the allure of just one more turn, or if you are looking to get a better grasp of the changing game, here’s what I think of the first entry into New Frontiers.

Our two new Civilizations are the Maya, led by Lady Six Sky, and Gran Columbia, led by Simón Bolìvar. Of the two, the Maya are the ones who are going to lead you to adopting a more radically different playstyle. That’s because you are limited in how much area you empire can cover. The Maya are penalized for cities that are more than 6 tiles away from the capital, and rewarded for cities that are close together. They also don’t get bonuses for being near water, instead they get housing from building farms. This encourages you to build a small nation of tremendously populous cities. With a little luck and a lot of planning, you can get crazy adjacency bonuses for your districts. My experience with the Maya was a lot of fun, and led me to start looking at the map in new ways. That’s a big success when it comes to new Civs!

Gran Columbia is less radical, but a fine addition if you like to win through conquest. They’ve got two units that act as a one-two punch combination. One is a unique cavalry unit, the other is a unique general. Their general can pick from all sorts of wild bonuses, and they get one for free every era. The bonuses are nice, but the real killer move is supercharging a bunch of cavalry units for a bit, making them hit fast and hard. Speaking of fast, Gran Columbia gets a permanent +1 to all movement, which is especially nice for getting your workers where they need to go.

Neither of these new factions feel as radical to me as previous additions like the Dutch, Korea, or the dual-country leading Eleanor of Aquitaine, but I like them plenty. I especially like the challenge of The Maya, who have less space to work with but who with the right focus, can be powerful indeed. I tend to not like units who are contingent on other military units, but tacticians are going to get a kick out of Gran Columbia’s unique units, and will probably come up with all sorts of strategies a simple man like me can hardly dream of.

The timing feels off, but fortunately the new Apocalypse mode doesn’t include a pandemic. What it does include are new natural disasters, and a few related mechanics. First off even in normal mode you’ve got to contend with a few new disaster types, including forest fires and meteor showers. Turn on Apocalypse Mode though, and disasters are turned to maximum. You can control them somewhat with a special unit called a Soothsayer, who can perform volcano sacrifices. All of this culminates in the most dramatic new disaster type, the comet impact, which is the only thing in the game that can wipe cities right off the map. 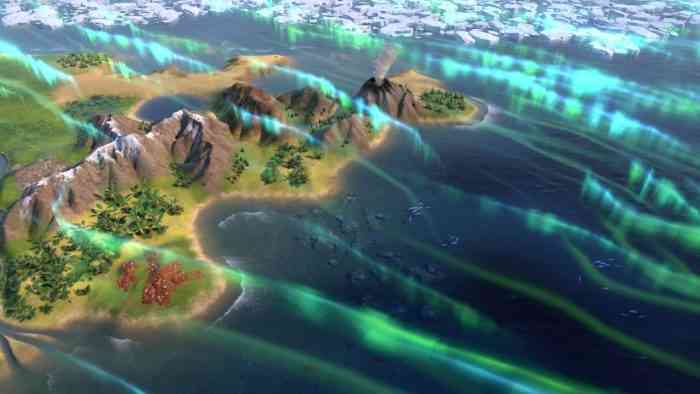 As a new mode, Apocalypse is fun, but I don’t see myself using it all that much. Sure, it adds some extra challenge and chaos to the mix, but that’s not what I’m looking for in a game of Civ. I rather disdain the Smash Bros players who turn off items and only fight on Final Destination, but I guess when it comes to Civ, I am That Guy. Still, Apocalypse Mode intrigues me.

That’s because, unlike the existing scenarios in Civilization 6, Apocalypse Mode is the first item on what looks like it’s going to be a checklist of modes. That means there are going to be all sorts of new ways to generate your map. This is evidenced by new Natural Wonders, which have a slightly mythological bent, like the Bermuda Triangle. Maybe there will be modes that drastically change the kinds of resources appear, or the speed at which the climate changes. Mix and match a few of those, and you have drastically different ways to play your game.

The Real Changes: Everything Else

This update comes alongside a patch and honestly, those are the things that more radically changed the shape of my game. There are obvious additions like a few new resource types, the new natural wonders, and a few new city states. But there are also updated rules for diplomacy, improvements to the AI, and most drastically, new starting parameters. City states are now less likely to start on top of highly desirable resources, and this opens up a whole lot of intriguing options to expand your empire.

Through multiple playthroughs I encountered a lot of natural wonders. Maybe it was my bad luck, but I found myself unable to work them in most games, as city states would spawn on top of them, or close enough that I couldn’t build near one. Strategic resources too are better distributed. Some risky settlements in deserts paid off later when they turned out to be built around oil and uranium.

I find the endless re-balancing of competitive shooters to be tedious, but Civilization 6 always felt like a messy game. By tightening things like the AI and the map making, fundamental systems that drive the game, Civ 6 inches closer to perfection: the ultimate Civ game. I don’t know if we are there yet, but with a few more patches like this, and I am confident Civilization 6 can become the best version of itself.

Civilization 6 Announces a Mountain of New Content
Next Outriders Breakdown – Next Gen Looter Shooter Evolved
Previous World of Warcraft is Suffering a Slow Death, But Help is on The Way