Forget those other tier lists. Forget playing for fun — Gathering Storm is a great new addition to Civilization VI, but you came here because you want to win. The clash of civilizations must end in victory, and that’s why we’ve ranked the new factions and leaders in Civilization VI: Gathering Storm. Follow our tips here, and you will be assured victory over your foes and allies.

Ranking Queen Kristina, the Minerva of the North, so high in Civilization VI: Gathering Storm might seem a little bit controversial. Her unique unit is sort of blah. Her Open Air Museum is fun, but only matters if you can support colonies, which none of her other abilities support. And the Nobel Prize is cool, but you can take advantage of it even if you are playing as another Civ, as long as she is in the game. So why is Kristina the best? Automatic theming baby! Build some theater squares, build some wonders, and then start pulling Great People with your other bonuses. You’ll be generating crazy amounts of culture and tourism in no time. You’ll also make a killing in Diplomatic Favor. At the very least, you can burn it off for good trade deals with the thirsty AI, or you can take advantage of the World Congress for even more cultural bonuses. Kristina is hyper-focused and takes great advantage of the expansion’s new mechanics.

Getting started as Mali in Civilization VI: Gathering Storm is sort of a pain, but Mansa Musa completely changes the game. As the richest man who ever lived, you don’t wait to build stuff — just buy it! Sure, the early years are kind of scary. Before you’ve gotten your economy up and running, everyone else will be putting out units, settlers, and buildings faster than you can build a monument. But survive long enough and you’ll be buying a half dozen buildings a turn, letting you focus on city projects. Get an early Golden Age and you’ll be making even more gold, plus you can use a dedication to recruit settlers with fatih. With enough planning and just a little bit of luck, Mansa Musa is one of the most flexible and unique leaders in the game. 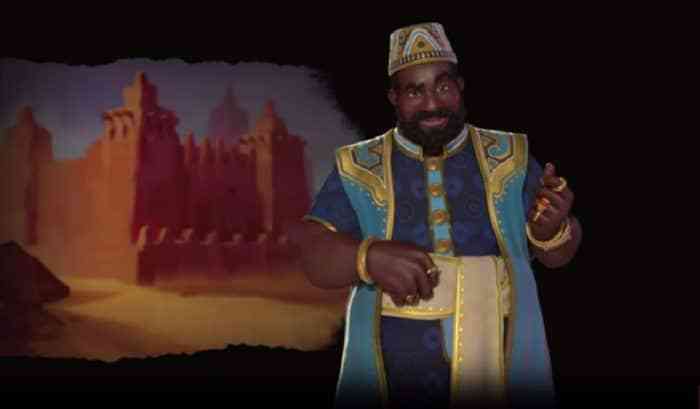 I know, tundra sucks, and the ability to farm on it is whatever. Purchasing more tundra? Whatever. Purchasing snow? That’s a joke. And hockey rinks are cool, but zambonis aren’t going to rocket you to victory. But for the peace-lovers out there, Canada has a secret weapon: it’s their lack of weapons. New in Civilization VI: Gathering Storm, Canada is immune to surprise wars, something that the AI loves to do. This means that beyond the occasional barbarian rabble, Canada can focus wholly on what they are good at — culture and economy. Emergencies will happen, and with a lot of money in the bank Canada will be able to take advantage and use their other killer ability to gain extra diplomatic favor, which they can use to purchase a diplomatic victory. The early-warning before wars will give you the time you need to protect yourself, and probably free up your resources to focus on victory.

Click Thru to see The Rest of Civilization VI: Gathering Storm’s New Leaders!

The Top Ten Amazing Amazon Deals for Console Gamers
Next Anthem: 57 Average on Metacritic and They All Missed One Obvious Thing
Previous 10 Video Games For People Who Haven’t Played Video Games in Years