Civilization VI stands apart from other entries in the legendary strategy series. It takes things out into the world by unpacking cities, wonders, and armies. It makes you consider humanity’s relationship with the planet it inhabits. In Civilization VI: Gathering Storm, the planet is not a passive participant. In this game, the planet itself is as important as any player in the game.

By adding a smattering of new civilizations to play as and a ton of new features, Gathering Storm makes Civilization VI feel like a more complete game. Re-balanced factions, new paths to victory, new challenges to consider and most important a brand new end game really make this expansion feel like a new game. Strategies that once worked now need to be complete re-imagined. The game that I’ve spent hundreds of hours playing just refreshed itself, and I plan to play it for a thousand more. Let’s get into what makes Gathering Storm so fresh, and why it works so well.

Time to Fight Back

Right from the get-go, you will notice some things are different. You may start out next to an active volcano. A river might flood. A hurricane or blizzard might push your development in unexpected directions. No longer is the planet simply a playground for you to explore, expand, and exploit. Now you have to consider risks and rewards. A volcano creates fertile soil for better farming, but can easily destroy improvements or even reduce a city’s population. A hurricane can damage or kill any troops who walk through it- but drive your enemies into a storm during a war and you can turn the tide in your favor. 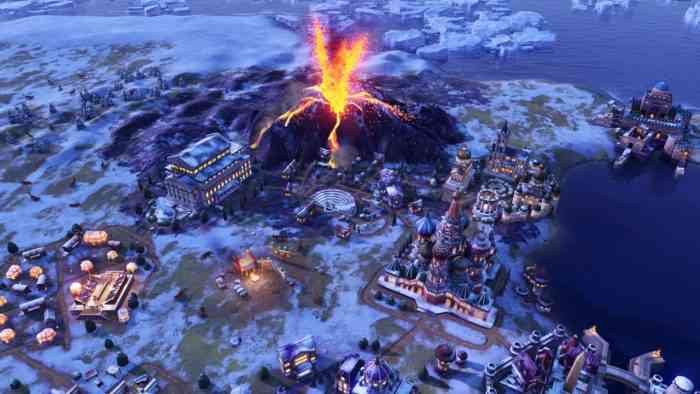 Some risks are longer-term. When you first select a settler, you will notice new icons indicating where sea levels can eventually rise. Gathering Storm tracks pollution, climate change, global warning, ice caps melting, and sea levels rising. These risks ask a very different sort of question: will you be able to come up with the right kind of technology to mitigate these risks? With sea walls or carbon scrubbing it is possible you cities and districts won’t be swallowed by the rising seas. Or maybe you can go green and use the new World Congress to force other nations to do the same. Or you can position cities inland, build a ton of coal-powered plants, and cackle like Lex Luthor as the rest of the world sinks into the ocean.

With new terrain features to consider, there are also new ways to interact with your environment. The first and most dramatic is a dam, which can be used to protect a city from flooding. Dams are also a great source of clean electricity, but there is only one dam permitted per river- if you share access to a river with another Civ, you’ve got another building to race towards. 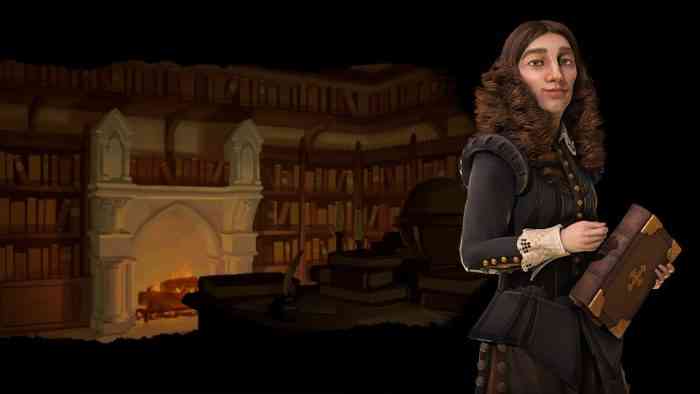 You will also be able to build tunnels and canals, which can greatly change mobility options. I’ve used the sudden construction of tunnels to quickly move soldiers around an invading army, greatly changing the tactical warfare side of the game. I’ve also used canals to move my navy into a better position to explore the world, giving myself a ton of Golden Age points, and using the features from the last expansion pack Rise and Fall in new ways.

The World Congress is extremely difficult to wrap your head around. It involves multiple votes, for multiple contingencies. Sometimes, your vote, for one thing, can contribute to a whole different category, and it’ll take a little while before you master the intricacies. For example, you can vote for soldiers to be more expensive or cheaper to make. But within those categories, you also have to vote for whether or not they are cheaper to build with construction or purchase with gold. Those votes are counted together, and then against each other within the category. See? It’s a little tricky.

The World Congress is probably the new feature that needs the most re-tooling. At the moment, possible votes are chosen from a narrow set of options based on the era. A few times in a game, you will feel that the vote is irrelevant to you. The best use of the Congress so far is a completely revamped Emergency system that has greater risks and rewards and gives you more control over Rise and Falls least compelling new feature. Warfare as a whole has been completely revamped, with a system of grievances replacing the old warmonger score, and leading to interesting and complex relationships within the Congress.

The Congress is also a compelling way to make new friends. New environmental emergencies are a great way to work towards your own victory while supporting a new friend. After the Zulu lost a bunch of their coastal cities to hurricanes, I contributed a ton of money towards their rebuilding. Not only did this give me bonuses towards a victory, the Zulu were forever my grateful allies. 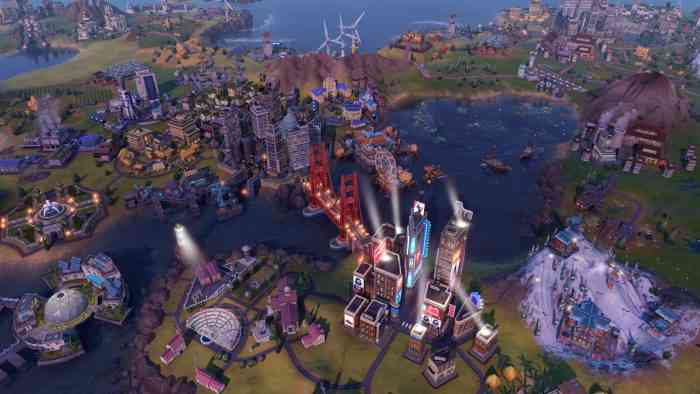 Diplomatic victory is back, and it is a good one. At first, your chances to earn Diplomatic Victory Points is rare. Participating in emergencies is a good way, and later you can get them from winning at global events like the World’s Fair or the Olympic Games (called something different for copyright reasons). In later eras though, you can use the world congress to nominate yourself (and other Civs if you’re crazy) for Victory Points, and start scoring them every session.

You vote for these points with a new consumable resource called Favor. Favor works a little bit like gold- you can earn some every turn and hold on to it to sway the World Congress. Or you can just trade it. Favor is generated by doing peaceful diplomatic things- controlling city-states gets you favor, and so does forming alliances. This is awesome, because it gives a new dimension to peaceful strategies- or a new incentive to be careful and devious with you warfare.

The most subtle of the new changes comes in consumable resources. It used to be you had access to strategic resources or you didn’t. Now you fill up a limited bank of them like in a real time strategy game. At first I didn’t think I’d like this change, soon it became my favorite re-balance. It makes strategic resources more interesting, and preventing other Civs from having them is a hugely important strategy.

Initially, you will spend resources like iron and horses to build special units. But eventually, you will need to collect enough coal or oil a turn to support all your buildings and units that need it. This is a simple economic question- if you need 8 oil per turn, you best be collecting more than 8 oil a turn or you will run out. But you can also trade resources away in deals. A frugal trader can get away with buying what they need without actually having any within their borders.

Electricity is pretty simple, but very tempting. The main dynamic exists between the desire to get bonuses and the desire not to pollute. There are no penalties for not getting electricity. But those bonuses are tempting. We’re talking the difference between a building giving +5 science per turn and +13 science per turn. With other bonuses, that can grow exponentially, giving you yet another brutal risk/reward choice.

Of course a new expansion means new Civs and new wonders. I was shocked to learn how much I loved Sweden, who takes advantage of the new systems very well. The Ottomans are fun too, using the governor system from Rise & Fall to assist them in siege warfare. We at COG are thrilled Canada has finally made it to a Civ game, and they are deceptively strong. Besides getting the most out of snow and tundra tiles, Canada is immune to surprise attacks, and can focus on peaceful building.

But what really excites me is how all the new changes breathe life into the existing Civs! Some of these changes are weird and obvious. Japan now, has a whole new ability about resisting hurricanes. Other Civs are mostly the same, but now contend with new systems. Persia was all about sneak attacks and reducing their warmonger penalties- but there are no more warmonger penalties, so they’ve been slightly changed to reflect the new grievance system. The balance is good, and it makes them feel fresh to play. Norway, often lamented as the weakest Civ in the game, receives a small bonus as pillaging has been made more viable. I haven’t played with every single existing Civ, but I’m already noticing new dynamics. The Khmer feel much more intimidating. The Mapuche feel stronger as well.

Ushering In a New Era

Finally, Gathering Storm adds a whole new era. This changes the late game profoundly, which is always the most important aspect of a Civ expansion pack. No longer can you set up your civilization like a perfectly made watch, and click ‘end turn’ until victory. The technology and culture trees now unlock a new section- one that is totally random! This might mean a lot of military technologies, or a lot of new civics cards for your government, or new improvements, or something more esoteric. This element of unpredictability is great, and arrives precisely when it needs to. You don’t always get what you want, but sometimes you might find what you need.

There are also little changes to victories. The Science Victory takes longer and is less straightforward, now requiring that you explore and settle an exo-planet. The culture victory has been given new soldiers- rock bands. These units can go on tour in foreign Civs, granting you a ton more tourism, and making the Cultural Victory a more active venture.

That embodies the spirit of Gathering Storm – it’s more active. There are more choices to make and more consequences to worry about. Things that seem simple in one moment can spiral out to affect the game in startling ways. Civilization has always been a board game too complicated to play with cardboard and plastic pieces. Gathering Storm takes that complexity to new levels of simulation, but it is so well presented you never feel overwhelmed. I’m an easy mark for a new Civilization, but I have no fear in saying that Gathering Storm is one of the most creative and significant expansions a Civilization game has ever received.