PUBG: New State has a futuristic take on the traditional formula of the franchise.  Krafton shared a teaser video as they announced that the game is getting a new vehicle. It is not just any vehicle. It is Bugatti’s Rimac Nevera.

The Rimac Nevera is a forward-thinking electric hypercar. It is marketed as the fastest in the whole world. It will be available to PUBG: New State players in the Troi map. They also did not share any information on the hypercar’s specifications. 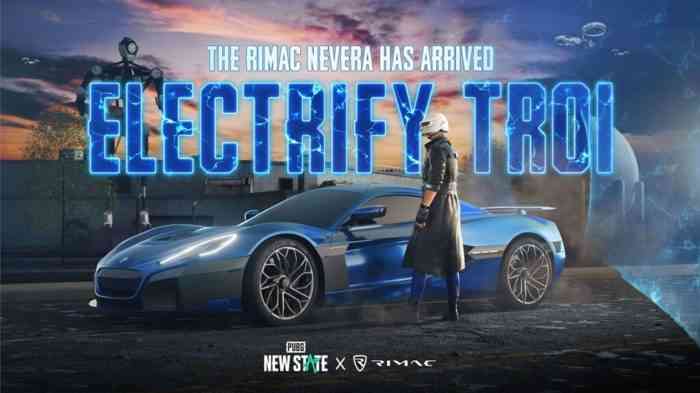 PUBG: New State’s upcoming vehicle is actually its second model from the Croatian vehicle manufacturer. Out in the real world, the two-seater is powered by a 120kWhr battery that churns out 1,914hp with 13,430Nm of wheel torque. It is capable of reaching up to 412kmph. It gets its power from four independent electric motors—one on each of its wheels. According to multiple claims, it can hit 0-100kmph in 1.93 seconds.

Unfortunately, Krafton did not reveal when they were officially releasing the vehicle for use. All PUBG: New State’s fans know about its launch is that it is “coming soon.”

In addition to the Rimac Nevera, PUBG: New State is also getting its first batch of major updates in the first couple months of 2022. It is the devs’ main priority “to continue making updates and improvements” in order to meet community expectations. “We also want to make sure to provide all our global survivors the best service and gaming experience, regardless of location or device,” Krafton added.

Thy shared a preview of this month’s patch. This notice gives fans a sneak peek into the upcoming new content. There will be a new Extreme mode that limits battle royale players to only 64, with a 20-minute time limit for faster-paced matches.

Are you excited about this partnership? Let us know in the comments below.

PUBG: Battlegrounds Update 19.1 Will Introduce Weapons And More
Next
Edge of Eternity Getting a Physical Edition Next Month
Previous
A New Serious Sam Game Is Coming Later This Month