Brave the Depths of the Desert

The last time we took a look at Sands of Salzaar, we said the game wasn’t quite done baking, and it was true. Today, that changes. Sands of Salzaar has officially launched on Steam, which means that fans can now experience this open-world title as it was meant to be played.

Sands of Salzaar brings players to an exotic desert and tasks them with guiding troops into battle. First, though, you must recruit and train those troops to make sure they’re prepared. This title offers fans a mix of large- and small-scale real-time strategy action set in a vast desert. You’ll be able to lead massive armies into battle and explore a branching narrative that changes based on your decisions.

Sands of Salzaar’s launch allows you to customize your hero as a warrior, sorcerer, beastmaster, or one of the game’s other classes. You can dive straight into Story mode and start forging relationships and trade agreements. Alternately, you can leave the narrative to the wayside and explore the game’s sandbox mode. The desert is your oyster.

Each playthrough offers new challenges and experiences. You will meet new characters, trade across borders, and unlock unique talents. And, if that’s not enough for you, get started on building an army. The world won’t wait for you to be ready–the Old Empire has fallen, and now your tribe must take its place.

Players may already be familiar with Sands of Salzaar’s combination of massive sieges, dungeon combat, and small-scale battles. However, Sands of Salzaar’s launch adds several new mechanics to the game. This includes AI rebellion, tribal titles, and a brand new Favor system between NPCs. The launch also reworks character skills and arms units across the board, brings an all-new UI experience, bonus side quests, mod support, and more.

Recruit and train your forces by taking advantage of new features like hero-exclusive command skills and exploit a fresh system for upgrading units. Then prepare yourself to go up against a range of AI troops and bosses. You can claim their land, resources, and even attempt to capture legendary beasts. If war isn’t your thing, Sands of Zalzaar also allows you to make peace and befriend your rivals through diplomacy. Making peace is its own brand of strategy. 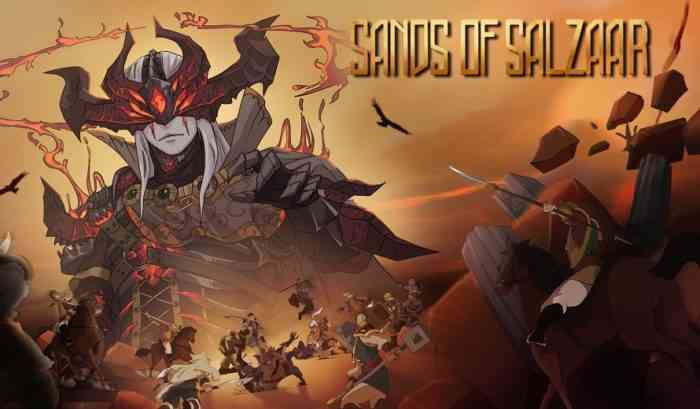 Sands of Salzaar is now available on PC.

Are you ready to explore the desert? Let us know down in the comments, or hit us up on Twitter or Facebook.