Battlefield 2042 Fans Are Mad About the Santa Claus Skin

Battlefield 2042 fans are not happy campers since the game’s release. The game’s current state was already enough to annoy them. It looks like they found yet another thing that they do not like about it.

Electronic Arts and DICE rolled out a Santa Claus skin as part of the shooter’s upcoming holiday themed cosmetics. The Father Christmas skin is for Russian fighter Boris Guskovsky. The skin certainly reflects the holiday season, but many Battlefield 2042 players think it is too silly and not appropriate for the game’s grim military sci-fi setting. 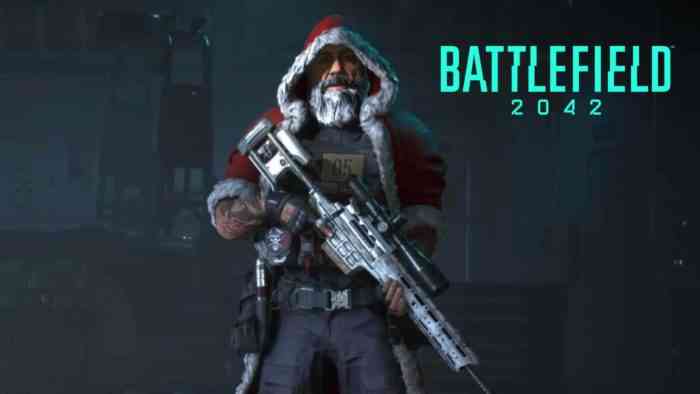 “I knew clown show skins like these were coming,” said one Battlefield 2042 player. “DICE wasted no time and added them in the very first update—incredible.”

The main issue among Battlefield 2042 players is that DICE decided to move away from the franchise’s dark and gritty tone. Some even compared the silliness of the new skin to Fortnite. “Oh, no, Fortnite skins,” one fan wrote on social media.

“DICE expects me to be able to take the game seriously with literal Santa Claus running around shooting people in what is supposed to be a world where billions are displaced, natural disasters are destroying the planet, and there is about to be a massive world proxy war,” another Battlefield 2042 player complained. “We are supposed to take all that into account with Santa f*cking Claus running around on the battlefield.”

“Where is my dark, gritty, and mature tone from the lore?” complained another. “Why they had to be so cheesy, corny and edgy at the same time? Is this game a lighthearted esports title?”

Battlefield 2042 only launched a month ago, and its player base on Steam already dipped by 70%. Over the past 24 hours, its peak number of players was only a little over 30,000. This is a far cry from the 100,000 concurrent players that were present during the game’s early access launch.

What do you think of the Santa Claus Skin? Let us know in the comments below.

Gwent: Rogue Mage Will Be Out Tomorrow
Next
Sea of Thieves Season 5 is out Today
Previous
FTC Sues Nvidia to Prevent it From Becoming “Too Powerful”