League of Legends’ champion, Jinx, is officially heading to Fortnite as a new skin. This crossover is courtesy of a budding partnership between Epic Games and Riot Games. Jinx’s entry into the game’s battle royale marks the first time that a League of Legends character has found their way into another game universe—if not for a PUBG Mobile tie-in that was recently announced. 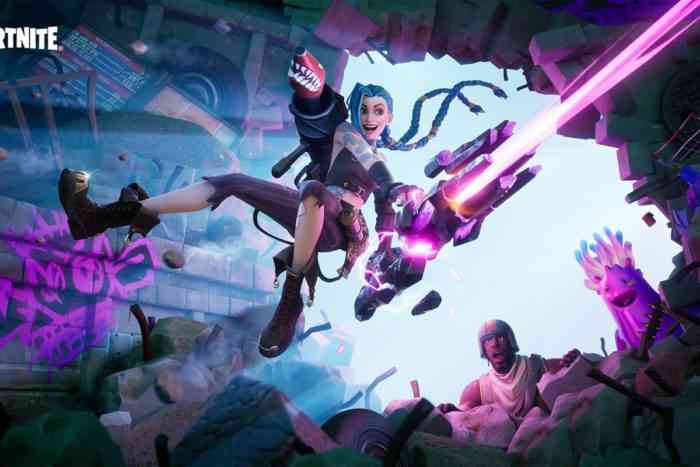 “We cannot wait to see Arcane Jinx jump off the Battle Bus!” Fortnite devs wrote on social media. “Welcome to the Island!”

Jinx’s addition to Fortnite arrives just ahead of her debut in the Netflix show Arcane, which will be aired on November 6th. Riot is clearly on a full promotion mode for the show, with their multi-stage marketing tidal wave.

The new skin will be available in Fortnite’s Item Shop, alongside themed gear, such as the Back Bling, a pickaxe, and a spray, in addition to a lobby soundtrack and loading screens.

Riot Games is reportedly porting League of Legends, Valorant, and Teamfight Tactics to the Epic Games Store. This, in turn, marks the first time that they are made available on a platform that is not Riot’s own launcher. Although fans of the studio may have already downloaded these games a long time ago, it is still a good way to promote their titles to Fortnite’s following.

“Fortnite has executed high profile collaborations and entertainment experiences while remaining committed to bringing players content that enriches their experience both in and out of game—a dedication we share and admire,” said Riot Cross-Product Experiences and Partnerships Lead, Brandon Miao.

Fortnite is definitely not a newbie when it comes to epic crossovers. Over the past few months, Epic Games has added a variety of superstars in the gaming world, such as Halo’s Master Chief, God of War’s Kratos, and several Street Fighter characters, among others.

Are you happy that League of Legends’ Jinx is joining Fortnite? Let us know in the comments below.