Far Cry 6 fans were sent into a frenzy after the crossover mission with Danny Trejo, more popularly known as Machete, was released too early. Trejo’s tie-in with the game was supposedly part of three free crossover missions—the other two are Stranger Things and Rambo—that were scheduled to launch in December.

“The Dani and Danny vs Everybody mission is a work-in-progress and was accidentally released early,” Ubisoft announced on social media. “We are working to remove it and look forward to when players can check out the final version.” 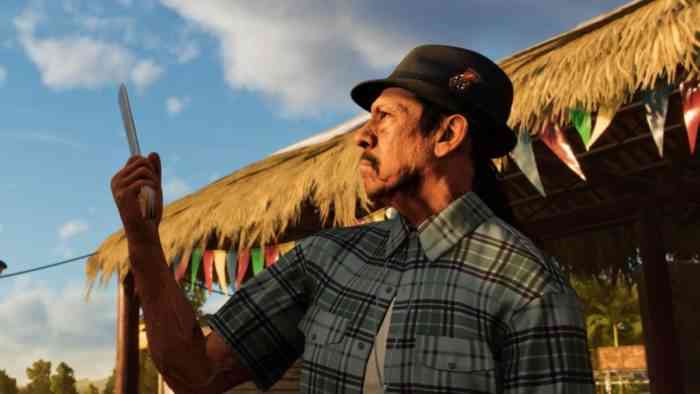 The devs have quickly removed all traces of Trejo and his mission within Far Cry 6, with a promise that it will be released once fully ready. The console patch ay have already gone live, but there is still no confirmed date for when the update is rolling out to PCs. What fans know at this point in time is that it is going to be a pretty beefy patch, considering that its patch notes suggest it will be a 54GB download.

The Far Cry 6 update did more than remove Trejo’s tie-in, too. There were some quality of life improvements, such as making the game’s title sequence skippable, and updating its colorblind mode. There were also some bug fixes within the patch that fixed issues with looping deaths. New daily and weekly challenges have also been added, including a new special operation named Los Tres Santos—which, in turn, will be available to Far Cry 6 players starting November 9th.

Before the Far Cry 6 crossover with Trejo was removed, however, some players were quick to share that they were already able to finish the mission. “I did it though,” said one player, sharing some screenshots of the experience.

The recent Far Cry 6 patch was already launched for PS4, PS5, Xbox One, and Xbox Series X/S consoles, while PC, Luna, and Stadia will be getting it at a later time.

Were you able to see Danny Trejo in Far Cry 6 before the mission was removed? Let us know in the comments below.