Though video game movies have had a pretty bad track record of not doing justice to their source material, the Resident Evil movies of the 2000s and 2010s have taken exceptional liberties in their creation. Hopefully, the reboot Resident Evil: Welcome to Raccoon City will be more faithful and more enjoyable for fans when it debuts.

Today, we were treated to the first trailer for the movie, which will be coming to theaters in November. Since Welcome to Raccoon City will be setting  Resident Evil 1 and 2 as parallel events, some details will be different from the games. 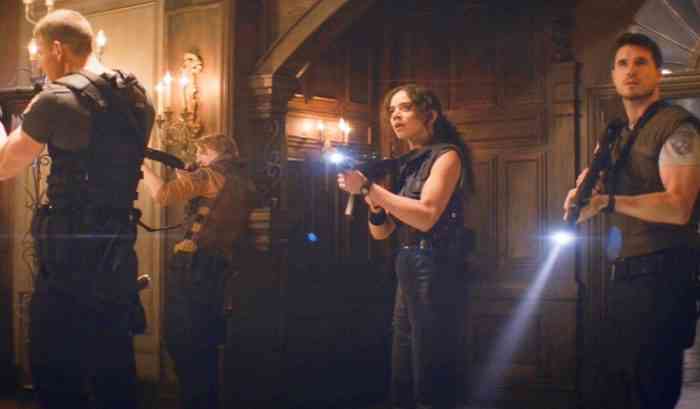 The trailer is full of callbacks to the first two games, obvious, since they are what it is based on. From set images we have seen during production, there are going to be a ton of familiar settings, iconic enemies, and memorable moments.

Moments like the infected trucker crashing his fuel tanker in front of RPD, encountering mutant dogs in the RPD garage, and hearing What’s Going On? by 4 Non Blondes the whole time. Was I the only fan who did that in 1996?

We see many characters we would expect to see from the first two games, including Chris Redfield, Jill Valentine, Albert Wesker, Claire Redfield, and Leon Kennedy. Of course, some of the most recognizable things about Resident Evil are the enemies. Not only are the heroes going to be facing off against infected people, but we see some iconic creatures like Lickers and Tyrant.

For those fans who have been waiting for a truer adaptation of Resident Evil, I am hopeful for you. Resident Evil: Welcome to Raccoon City debuts in theaters on November 24th.

Are you going to see the new Resident Evil movie? Let us know in the comments below.