Turtle Beach Corporation is a leading provider in video game accessories and has cemented that position as it has released countless premium products including headsets, mice, keyboards and more. In July, Turtle Beach provided some intel on the Xbox Recon Controller and confirmed that it would be available soon. The company has now confirmed that fans can purchase the controller at retail outlets worldwide as well as the website in both black and white for USD$59.95! 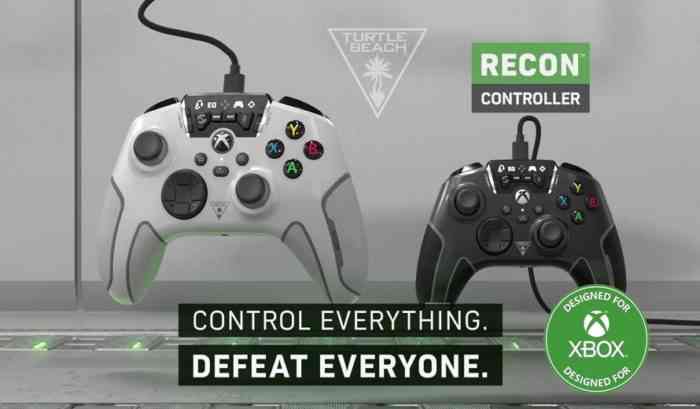 The Xbox Recon Controller sets itself apart from the competition as it uses Turtle Beach’s innovative technology and mixes it with game-winning controls. The controller can be utilized on the Xbox Series X/S, Xbox One and PC. Gamers can use a 3.5mm jack through their wired headset and plug into a new world as Turtle Beach offers a ton of advantages including Superhuman Hearing, Mic Monitoring, Signature Audio Presets and more.

The design of the Recon Controller allows players to game for longer as it ensures your hands stay cool due to its ergonomic shape and rubber grips. The controller’s vibration mechanics through its handles and triggers using dual-rumble motors affords players an immersive experience.

Furthermore, Pro Aim Focus Mode gives players an edge as they can customize their thumbstick sensitivity. Four profiles can be saved for the mappable rear quick-action buttons.

Juergen Stark, CEO of Turtle Beach Corporation, stated, “With millions of headsets being worn by gamers on Xbox, the Recon Controller is the best complementary accessory because it provides access to Turtle Beach’s exclusive audio technologies to any wired headset…The Recon Controller was designed with the same industry expertise that has made Turtle Beach the best-selling gaming headset maker for over a decade, and its unparalleled features and design will help it make a striking entrance into the console controller market. I’m proud of how the Turtle Beach team has once again delivered an amazing product, and I’m excited to have Xbox gamers get the Recon Controllerin their hands.”

What are your thoughts on the Xbox Recon Controller? Are you interested in purchasing it? Let us know in the comments below or on Twitter and Facebook.