This Hunt is More Than Worthwhile

You probably knew that Nintendo’s eshop had a rewards program, but if you’re like a large number of Switch players, you never found a good way of using them. And that’s understandable – with the usual payout rewards being on the middling side, many players haven’t yet found a reason to pay attention to those little coins. If that mindset sounds familiar, read on. This article is especially for you.

If you’ve never used the Switch’s reward points before, now may be the time to fix that. You should have been given a number of them when you first bought the console – and if they’re still there, Nintendo just offered a great outlet for them: a contest! 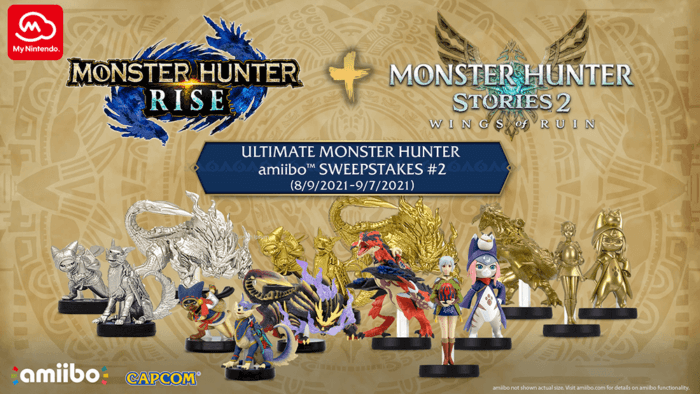 The rules are pretty straightforward: 10 platinum coins per entry, up to 3 entries per person, and you’re in. That’s it. 10 winners will be chosen from the pool, and sent a rather substantial prize pack.

This isn’t the first time Nintendo has done something like this. This is the second time a contest like this was ran, and clearly it was successful enough to demand a second run.

Just like last time, the Amiibos on offer are a wide selection, from Monster Hunter: Rise and Monster Hunter Stories 2: Wings of Redemption. There’s 15 in all – 3 Amiibos featuring characters from each game, all-gold variants of each, and all-silver variants for the ones from Rise. On top of that, you’ll also get five 11″ x 17″ posters featuring some of the coolest monsters the franchise has to offer.

So even if you’re not a huge Monster Hunter fan, it’s still probably worth it to enter. Monster Hunter’s art direction is top notch – so even if they’re just “cool-looking characters” to you, they’ll do wonderfully on display.

If you’re sold on entering, the source down below is also a link straight to the contest’s page. Best of luck, Hunter!