Minecraft is one of those games that never really ends. You can play pretty much forever and there are constant updates. Minecraft Dungeons is proving to be the same way. There are regular DLC releases and free updates.

Earlier today, Mojang announced Echoing Void, the last DLC of the season pass. This DLC will be exploring The End, the area where Minecraft players encounter the Enderdragon. It is also the domain of the Endermen. As with all the previous expansions, Echoing Void will be adding new enemies, gear, and missions, and will be arriving alongside a free update. 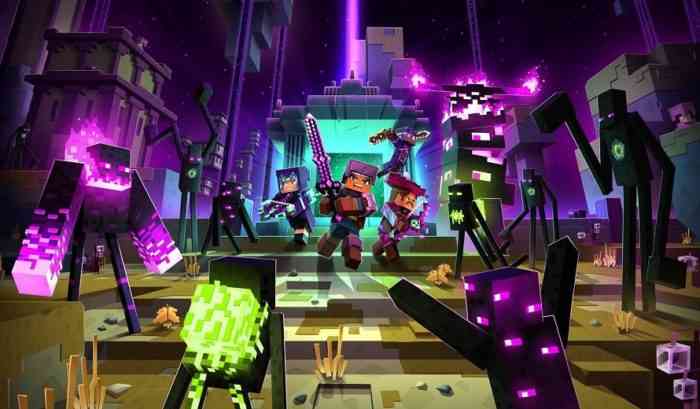 The new update is called Gauntlet of Gales, where players will be thrown into a challenging maze-like area. There will be puzzles and trials that will test players. Gauntlet of Gales will be adding new enchantments, like Ambush, Shadow Blast, and Void Strike.

When Echoing Void and Gauntlet of Gales releases, Minecraft Dungeons: Ultimate Edition will also launch. It will include all six DLC packs, not just the ones found in the season pass. Jungle Awakens, Creeping Winter, Howling Peaks, Flames of the Nether, Hidden Depths, and Echoing Void will be part of the Ultimate Edition, as well as all the accompanying updates.

Echoing Void seems like the natural end to Minecraft Dungeons DLC, but it is supposedly not the end? It is unclear if there will be another round of expansions, season pass, or if there will just be more free updates, but hopefully Mojang will shed some light on that soon.

Have you been enjoying the Minecraft Dungeons DLC? Let us know in the comments below.