A Psychological Horror Adventure Inspired by 70s and 80s Movies

Indie games have a tendency to push boundaries and tell stories the creators feel strongly about, which may be why so many of them venture into horror territory. Indie games developer ManiacBoyStudio just finished a successful Kickstarter campaign for its upcoming horror title Skeler Boy, a gorgeous pixel art game with a bizarre and unsettling trailer.

While ManiacBoyStudio is trying to keep much of the game’s plot under wraps–probably a good idea, considering how psychological horror games often rely on plot twists and the slow, dawning realization of what’s actually going on–the announcement trailer does show enough to rope in potential players. Warning: this video contains gore and depictions of suicide.

While specific details on the game’s story are still lacking, we can’t deny that it has a very oppressive atmosphere. Game features include:

Skeler Boy appears to focus on a young man with white hair and a lovingly detailed hoodie wandering through a lush pixel art city, haunted by bad memories, a voice in his head, and all too literal monsters. Tied into his condition is a girl named Megan who’s been locked up, crucified, and with noticeable bloodstains outside what we assume is her house.

Skeler Boy raised $7.9k, 110% of its original fundraising goal, proving that there is most definitely an audience for creepy games that refuse to tell you any details ahead of launch. After watching this trailer, we can certainly understand the appeal. 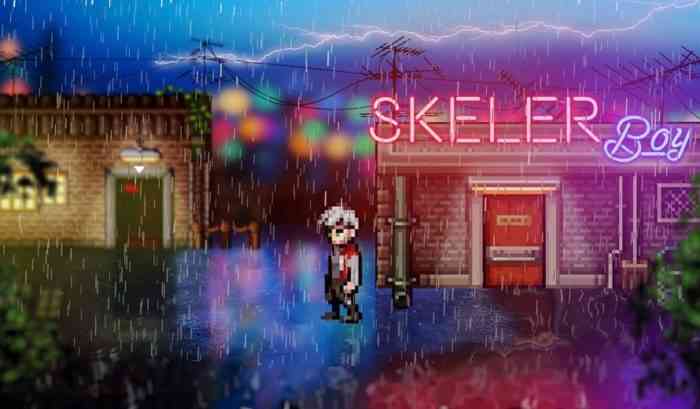 Skeler Boy will be released on Steam and GooglePlay later in 2021. Versions for Game Boy and NES are also expected to launch later on.

What psychological horror indie game scares you the most? Let us know down in the comments, or hit us up on Twitter or Facebook.