Quite a bit of buzz going around about Minecraft lately. First, the new Super Smash Bros. Ultimate character has been revealed to be Steve, and now new content for Minecraft Dungeons has been announced at Minecraft Live. Players have previously been able to explore the jungle in Jungle Awakens and snowy dungeons in Creeping Winter. It looks like players will be stuck in the digital cold weather a little longer with the next Minecraft Dungeons DLC called Howling Peaks. As the name suggests, this DLC will put players on the mountain tops. 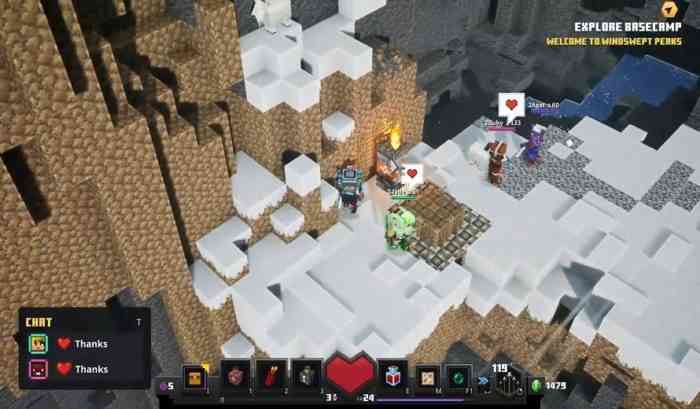 Howling Peaks was revealed with some live gameplay in which we see new mobs such as mountain goats and other enemies exclusive to Minecraft Dungeons. Mojang also puts the wind to great use in this DLC. There are many environmental obstacles with wind vents on the mountain, which will push against players, and if they are not careful, they will be swept of the side of the mountain. Not only that, buy some enemies actually manipulate the wind and can launch players into the air and deal fall damage on the way down.

Some other cool details about Minecraft Dungeons is that all the players in the gameplay demo were on different platforms. There was a player on PC, Nintendo Switch, PS4, and Xbox One all in the same game. Mojang will also be giving a free update in the future that ups the difficulty. Up until now, the hardest difficulty was Apocalypse, but very soon, players will be able to play on Apocalypse Plus. Crossplay will be available after a free update in November and the Apocalypse Plus free update will be coming alongside Howling Peaks in December. Minecraft Dungeons is available now on PC, Nintendo Switch, Xbox One, and PS4.

Are you looking forward to Howling Peaks? Let us know in the comments below.