New Smash Bros. Ultimate Character Is NOT From Fire Emblem?

The new character for Super Smash Bros. Ultimate was announced today and I am not sure how I feel. On one hand, yay, it’s not another Fire Emblem character that has no features that make them distinguishable from the others. On the other hand, is this the best we got? The New Smash Bros. Ultimate character is Minecraft’s Steve, the most non-descript-looking character with the most non-descript name. This character is not quite as simple as it seems though. Following the reveal, Mr. Sakurai talked about the difficulties he faced bringing Minecraft into SSBU. 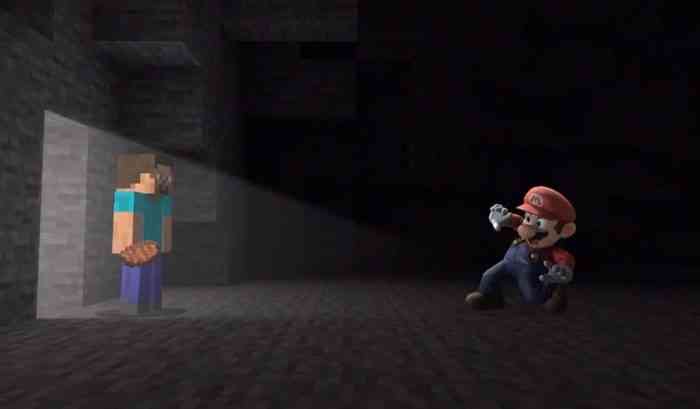 The reveal trailer shows Mario getting smashed through a wall into a dark cave. After a moment, the wall of the cave gets mined in, revealing Steve, who eats a steak in peace. After a Creeper shows up behind Mario, Steve retreats, leaving Mario to be blown up. It wouldn’t be Minecraft without skins. Players can also play as Alex, a Zombie, and an Enderman, as well as other vanilla Minecraft skins. The rest of the trailer shows off the moves for Steve, which seem out of place in SSB, but make total sense from a Minecraft character. The way that objects and items from Minecraft appear is very reminiscent of Mr. Game and Watch’s attacks.

The defining element of Minecraft is being able to destroy and place blocks. Mr. Sakurai says that every stage had to be reworked so that blocks would be placed. As with all new Smash characters, an accompanying stage is coming. This stage appears to change depending on the biome it is in. More information will be revealed on October 3rd in a special presentation of “Steve and Alex” with Mr. Sakurai.

Are you satisfied with the new Smash character? Let us know in the comments below.