In the Jungle, the Mighty Jungle

Minecraft Dungeons hit the stores last week and has been met with fairly positive reviews, however it could never escape the shadow of Minecraft’s success. While there is plenty of work for players to do in building their characters, Mojang has recently announced that there will be more for them to do soon enough. At least two Minecraft Dungeons DLC packs are planned and are on their way. You will be exploring more than just dungeons and caves in the coming months. 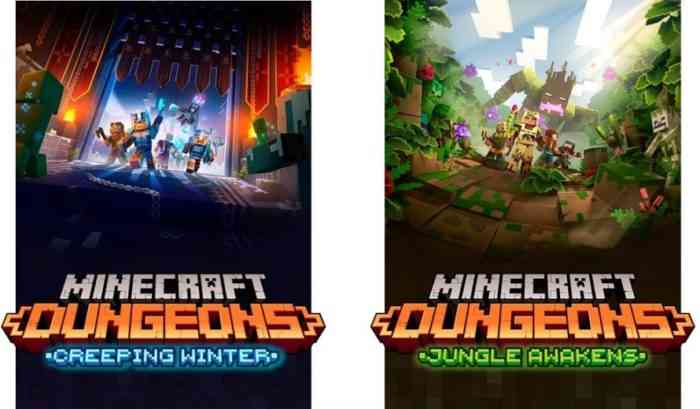 The first DLC planned for the game is called Jungle Awakens. It will feature levels set in Jungle biomes and expose players to brand new mobs to fight off. The base game included enemies exclusive to the spin-off and these new jungle-themed enemies will also be exclusive to the game. The three that have been revealed are called Leapleaf, Jungle Zombie, and Poison Quill Vine. Of course, you will also see your regular rabble of Skeleton Archers and Creepers. The second DLC is called Creeping Winter. Fewer details of Creeping Winter have been release, but players will be traversing snowy mountaintops.

Mojang has given Jungle Awakens a tentative release window of July 2020. As you may know, Mojang had to delay the release of Minecraft Dungeons after moving much of its development to a work-from-home setting due to the Coronavirus. While developers continue working from home, the July release is kind of up in the air. Creeping Winter has not been given a tentative release window, but if they are aiming for two months between each release, we may see it arrive in September or October. Minecraft Dungeons is available now on PC, PS4, Xbox One, and Nintendo Switch.

Are you having fun with Minecraft Dungeons? Let us know in the comments below.

The Outer Wilds DLC Echoes of the Eye Is Out Now