What are we calling Minecraft Dungeons fans? Minecrafters? Dungeoneers? Mojangles? Whatever you call yourselves, you will be able to play new DLC later this month. The new expansion is called Hidden Depths, and judging by the artwork, it will have an oceanic/deep sea theme. We are expecting a lot of underwater combat and exploration, but like with other biomes, there may be some variety in the locations. The announcement was just made today, so there is no gameplay footage to see, but we could be running on the beach, scouring the ocean floor, and wading through undersea caverns. 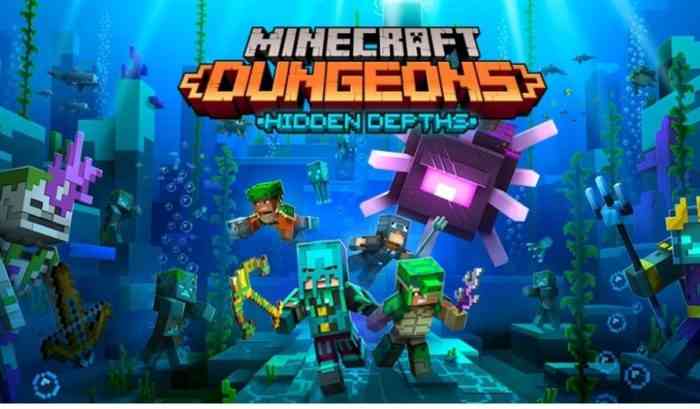 While there is not exactly any trailer or anything to feast your eyes on, there is also news of an accompanying free update. There are going to be additional things like enchantments, but the big ticket item for this update is the Raid Captains. These Raid Captains are super-tough enemies that appear in the deepest, darkest areas of the maps. It’s unclear if they are rare variants of existing enemies or their own type of mob, but they will be adding another challenge to those who seek it. Even if you do not get the Hidden Depths DLC, you can take on these Raid Captains for free.

Hidden Depths will be the fifth major DLC pack. It is included in the Season Pass along with Howling Peaks, Flames of the Nether, as well as the next expansion. Previous packs have cost $5.99 on their own, but you can get the Season Pass for $19.99. Hidden Depths will be coming out on May 26th. Minecraft Dungeons is available now for PC, Xbox One, PS4, and Nintendo Switch.

Have you been enjoying the different Minecraft Dungeon expansions? Let us know in the comments below.