Devolver Digital gives gamers a taste of what Shadow Warrior 3 has to offer in this brief, 2-minute-long teaser video for one of the upcoming game’s missions, titled ‘That Damn Dam.’ Much like the previous gameplay footage, this clip packs a staggering amount of action into its short runtime. There are so many monsters and they are getting absolutely destroyed by protagonist Lo Wang with a variety of guns, a knife, and even what appears to be a huge bone taken from the corpse of a fallen foe. The video also shows off a Gore Weapon, the Seeking Eye, which takes the form of a huge, staring eyeball surrounded by blades, optical nerves dangling free behind it. The Seeking Eye can be claimed from–read, seized from within the body of–the floating zombie enemy known as Seeking Shokera. Once acquired, the Seeking Eye appears to soar around Lo Wang and attack nearby enemies, dragging them into the air, which is pretty nice of it.

Between the bright colors, slick animation, finishing moves, tons of gore, and increasingly surreal monster designs, Shadow Warrior 3 reminds us more than a little of DOOM Eternal, not that we’re complaining. We’ll never say no to more bloody action games with a sense of otherworldly style, and style is one thing this game has in spades. The sheer scale of the level alone is awe-inspiring enough. Add in the throbbing soundtrack and the hordes of enemies ravening for your blood, and you have a game that promises to be incredibly fun.

What we know of Shadow Warrior 3’s so far tells us that Lo Wang, former corporate samurai, and Orochi Zilla, his former employer-turned-nemesis-turned sidekick, will be heading off on a mission to recapture an ancient dragon after they accidentally freed it from its eternal prison. Whoops. Now they need to avert the apocalypse with nothing but the mask of a dead god, a dragon’s egg, a touch of magic, and as much firepower as they can gather. Can they pull it off? We’ll have to wait and see, but signs so far point to yes. 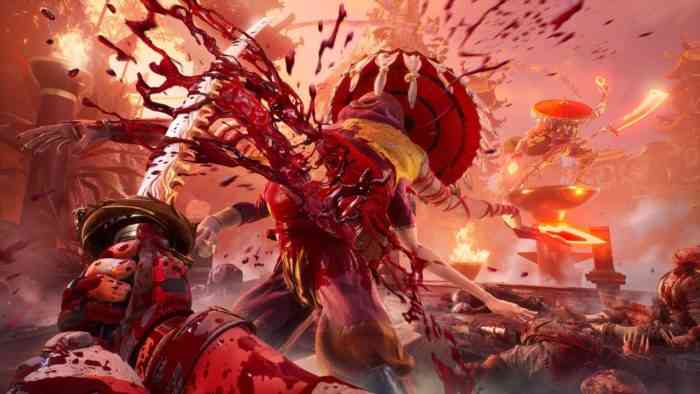 Shadow Warrior 3 will be available on PC, PlayStation 4, and Xbox One later in 2021.

What’s your favorite stylish FPS game? Let us know down in the comments, or hit us up on Twitter or Facebook.

Sonic Frontiers Launch Is Not Postponed, Says Sega
Next
Dive Into Minecraft Dungeons’ Hidden Depths DLC This Month
Previous
Play as Alcina Dimitrescu in Resident Evil 3 With This Mod