It Belongs in a Museum!

Earlier this week, the HD remake of the 1983 Spelunker was announced to come out for PS4 and Nintendo Switch, next week no less. It is a classic 2D platformer that not all gamers today will recognize, but Strictly Limited Games is making a Collector’s Edition for both hardcore fans and new players alike. It comes with a ton of collector’s items that highlight the updated version, but respects its classic roots. Though the game and Collector’s Edition is produced in Europe, North American fans will be able to grab one if they want. 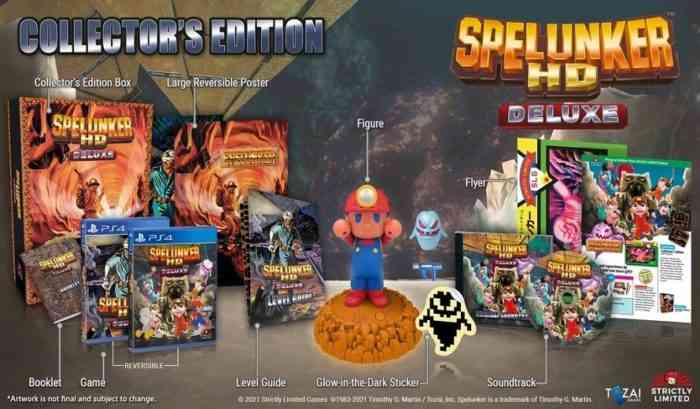 The Collector’s Edition is available for both PS4 and Nintendo Switch players. It comes with a physical copy of the game, which has a reversible box sleeve, a large reversible poster with two designs from the 1980s, a level guide that maps out the caves, a glow-in-the-dark sticker of the 8-bit ghost enemy, the HD soundtrack on disc, a Strictly Limited Games flyer, and a Spelunker figure that has attachable accessories and a button activated speaker on the stand. All of these items come in a Collector’s Edition box.

Though the game itself comes out on June 6th, the Collector’s Edition is a pre-order item and only 700 will be made for each platform. It will be available to pre-order soon and is expected to ship sometime in November or December. Spelunker HD Deluxe Collector’s Edition will cost pproximated $72.75 USD plus shipping. Spelunker HD Deluxe will be available on June 6th for PS4 and Nintendo Switch.

Are you considering getting the Collector’s Edition? Let us know in the comments below.

Check Out All the Different Editions of NBA 2K23
Next
A Guardians of the Galaxy Game May Be in Development
Previous
Warhammer 40,000: Darktide Adds A Fan-Favorite Writer To Its Team