This Fan-Favorite Dark Fantasy RPG is Getting Adapted For 5E

We don’t often cover tabletop RPGs on COGconnected, but we couldn’t let this milestone pass without drawing attention to it. Beloved dark fantasy RPG Symbaroum has been fascinating players since its release in 2016, and soon the wonder–and terror–will spread to 5E. Ruins of Symbaroum returns to a world of intrigue and mystery, where magic twists the body and corrupts the soul, and the deadly forest of Davokar challenges players to explore its depths and uncover the ruins of a long-dead empire. Go on, search for loot in those overgrown halls. There’s no way that could go wrong. Just look at how happy and upbeat this trailer is! (Note: trailer is not actually happy or upbeat.)

Ruins of Symbaroum has already raised over $400,000 on Kickstarter and unlocked 26 stretch goals, including a GM Screen with an adventure booklet, five double-sided setting maps, VTT modules for all three base setting books, and a virtual player’s guide, game master’s guide, and bestiary. The devs at Free League Publishing have put a ton of work into adapting Symbaroum for 5E and so far it looks like they’re doing a fantastic job–they’ve certainly got players everywhere hyped for the game’s release.

As of writing, Ruins of Symbaroum has 65 hours remaining on Kickstarter and has raised a total of $523,570 CDN. Anyone who yearns to explore the ominous lands found within this game–to explore the shadowed forests, trade with barbarian clans, establish their powerbase in the capital, and survive facing the corrupted denizens of the woods in battle–will be interested in backing this project while it lasts. Besides, any Kickstarter fully funded in 29 minutes is worth taking a look at. 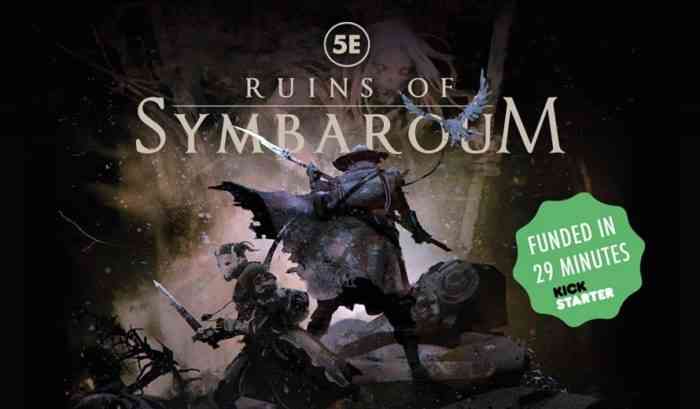 What’s your favorite tabletop RPG? Let us know down in the comments, or hit us up on Twitter or Facebook.

Assassin’s Creed Valhalla Orlog Board Game Is Being Made

ROCCAT Shows Off the Studio Quality Torch Microphone in a Stunning Trailer
Next
Watch Dogs: Legion Update 1 Has Officially Been Unleashed
Previous
Limited Run Games Has Officially Partnered with Xbox