Smite is no stranger to crossovers, but this one may take the cake. Hot on the heels of Gilgamesh and Tiamat, a new arrival has been announced–one we never saw coming. The SMITE x Monstercat Battle Pass will be bringing skins of electronic artists Slushii, Sullivan King, Noisestorm, and Koven to the battlefield of the gods alongside some of their best tunes. Slushii Hades turns the Greek god of the underworld into a DJ who fights with turntables, Sullivan King Gilgamesh heads into battle with a sword that has built-in speakers, Koven Chang’e is draped in holographic glowing light, and Crab Rave Khepri is exactly what it sounds like. That’s right, they brought Crab Rave to Smite and made it playable. Everyone, rejoice!

Gavin Johnson, Monstercat’s Head of Gaming stated that, “We’re excited for players to directly engage with our artists and experience their music through these unique integrations launching inside the SMITE universe. Each of the skins in the Monstercat Battle Pass are authentically aligned with the artist’s brand and the game’s creative elements, a synergy we strive for in all of our partnerships.”

Well, that sounds fantastic, but that’s far from all that’s contained within this Pandora’s Box. The Monstercat Battle Pass also contains four full Music Themes, a new announcer voiced by Sullivan King, and the opportunity to launch dancing crabs into the air like fireworks. Plus, you can find thematic elements of Monstercat’s Lost Civilization origin story scattered throughout the game, if you’re into that sort of easter egg. Bringing the iconic “Crab Rave” song by Noisestorm into Smite might make this Battle Pass worth it alone, but you’ll also get the upcoming Slushii song “Valhalla”, “Give You Up” by Koven, and “Someone Else” by Sullivan King. You know, just in case the crabs need something new to dance to. 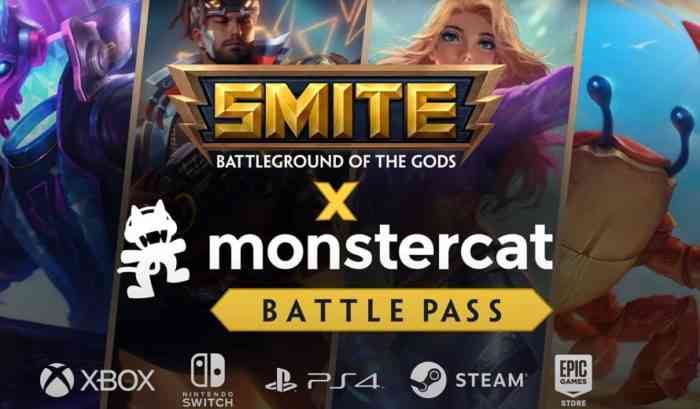 Do you crave to bring Crab Rave to the battlefield of the gods? Let us know down in the comments, or hit us up on Twitter or Facebook.