We’ve talked about Revita before. Our conclusion back then was that it’s a gorgeous but nail-bitingly hard shooter/roguelite, and we stand by that statement now, so we’re happy to announce that this niche title has found its audience. In fact, Revita has been so successful that solo developer BenStar released the game’s first major early access update today–an accomplishment that owes a lot to player feedback. The update is called ‘Beasts and Bees’ and it promises to bring a ton of new aspects to the game. Plus, it comes with a content roadmap showing the next planned update. 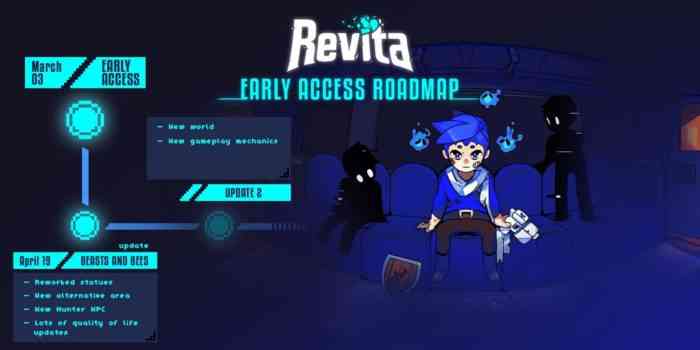 For those of you who are new here, Revita follows a young child with a gun in their struggle to ascend a mysterious clock tower. Each room is procedurally generated and full of creepy-cute horrors that won’t hesitate to shoot you dead. In order to survive, players must strike a balance between sacrificing their precious hearts for power-ups and just getting good at the mechanics, a task of Herculean proportions. In short, it’s a game about living on the knife’s edge, and we can’t recommend it enough if you’re into that.

Revita is currently available for PC in early access at $17.49 CAD.

Would you play it safe or risk it all? Let us know down in the comments, or hit us up on Twitter or Facebook.