What is an Anniversary Collection? A Beautiful Little Pile of Nostalgia!

The Castlevania franchise contains some of the best gothic horror games out there, but though some installments get brought back again and again, others aren’t so lucky… until now, that is. Before Symphony of the Night made Metroidvania history, these nine timeless classics helped define what platformers could do. Now they’re back as part of the Castlevania Anniversary Collection, which is itself given flesh in the four physical editions announced by Limited Run Games. That means you can now own Castlevania, Castlevania II Simon’s Quest, Castlevania III Dracula’s Curse, Super Castlevania IV, Castlevania The Adventure, Castlevania II Belmont’s Revenge, Castlevania Bloodlines, Kid Dracula (in its very first English release!), and History of Castlevania – Book of the Crescent Moon for Nintendo Switch or PS4.

If you really crave everything a special edition has to offer, there’s the Ultimate Edition. This one will be available for $174.99 and contains everything in the Classic Edition, the clamshell case from Bloodlines Edition, The History of Castlevania: Book of the Crescent Moon, a miniature replica box collection, some retro box art prints, a Castlevania logo enamel pin, a SteelBook, and a shadow box with lights and sound. Now that’s what we call special. 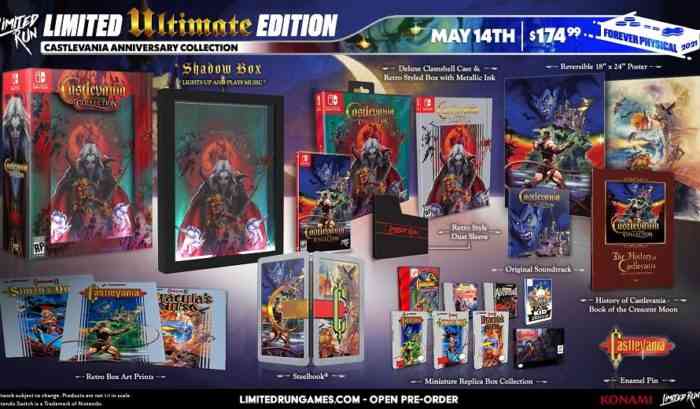 The Castlevania Anniversary Collection physical editions will be available for PS4 and Nintendo Switch. They will be open for preorder on May 14th, 2021.

What’s your favorite classic Castlevania game? Let us know down in the comments, or hit us up on Twitter or Facebook.