Rick and Morty Drops a Trailer for Season 5

Rick and Morty isn’t a stranger to big events. In a way, it’s the show that finally puts Dan Harmon’s talents to use; while he found a lot of success with Community it was in a more niche market, whereas Rick and Morty has gone from strength to strength, generating board games, video games, and disastrous McDonalds tie-in’s. Hell, they premiered the first episode of season 3 months early by way of constant repeats on Adult Swim – if that isn’t dedication to the bit, what is?

Thanks to the new announcement we now know that season 5 will premiere on June 20th – what is now being called Rick and Morty Day, in the grand tradition of Dan Harmon shows getting a day that began with Community’s October 19th – and it looks like it’s weirder than ever – and that can only mean good things.

In case you’ve been trapped in another dimension with no access to the internet (In which case hello, interdimensional traveller) Rick and Morty follows the titular characters, an alcoholic supergenius and his meek grandson – occasionally joined by their family – as they explore the multiverse, having bizarre adventures along the way – whether that’s getting embroiled in the latest adventure of a superhero team or accidentally mutating all of humanity. There isn’t much to be gleaned, story-wise, from the trailer, but we get snippets of a couple of adventures from the newest season – including Rick fighting off a group of other Rick’s (not as weird as it sounds), what’s described as a “Strange Horny Ocean Man” visiting the Smith/Sanchez household, an invasion by a giant mantis, and, most excitingly for classic horror fans, Rick and Beth rescuing resident butt monkey Jerry from a Hellraiser-inspired hell dimension. 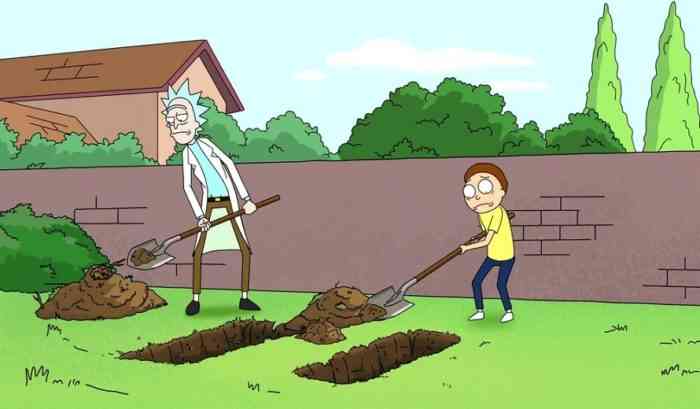 To coincide with the release, fans will get “a megadose of access and content of all things Rick and Morty“ across a variety of channels, including sneak peeks and behind-the-scenes footage.

Are you excited for the new season? Let us know in the comments, on Twitter, or on Facebook.