Will Feature Similar Visuals to Rick

The iconic Rick and Morty duo is finally united in Fortnite.  When Rick Sanchez was first introduced in Chapter 2: Season 7 more than two months ago, it had many players wondering when his grandson would arrive as well – if even at all, given his small stature. 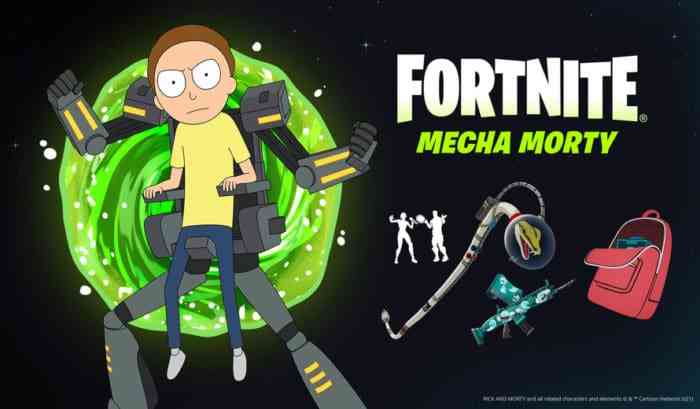 As it turns out, Morty is now available to be purchased in the battle royale game – with a mech suit.  Think of a suit more akin to Snuffles’ suit from the episode Lawnmower Dog rather than any of the outlandish mech suits featured in the show.  As shown by the trailer and in game, Morty will feature the same cartoon cel shaded look, much like his previously added counterpart Rick.

You can either acquire Morty through purchasing him individually in the Item Shop for 1,500 V-Bucks right now.  Additionally, there is also the option of purchasing the Mecha Morty Bundle Bundle, which contains a whole host of cosmetic items.  The bundle will include the Mecha Morty outfit, Morty’s Backpack as Back Bling, the Space Snake pickaxe, the Get Schwifty emote, and the Look At Me weapon wrap.

The additional cosmetic items add some cool and unique visual effects.  The “Look At Me” weapon wrap will add a Mr. Meeseeks image to your gun every time you acquire a kill – referencing the fact that Meeseeks are “helping” you to fulfill your purpose of winning.  Unfortunately, they will disappear with each new match – win or lose.  The “Get Schwifty” emote requires a counterpart Rick to recreate a rendition of the infamous “Get Schwifty” song.  Of course, the song will be censored to exclude some of the more explicit lyrics.

What do you think of the success of the latest Fortnite Skin? Let us know down in the comments, or hit us up on Twitter or Facebook.