There’s Also Some Special Editions and a Bonus Content Trailer, Too

We’re on a Nippon Ichi Software streak today–first, we got to share the announcement of Prinny Presents NIS Classics Volume 1 (which will contain the dark PS2 gem Soul Nomad & The World Eaters), and now we get to talk about the upcoming Disgaea 6: Defiance of Destiny, too. The latest entry in this demonically funny SRPG franchise will be arriving on June 29th, 2021, so save the date and prepare yourself for another hilarious romp through the Netherworld. As if that weren’t enough, we also have a bunch of stuff to tell you about the different editions the game will launch in. But first, let’s take a look at that Bonus Content Trailer, which contains a reveal of four free DLC characters and a special message from Nippon Ichi Software President Sohei Niikawa.

Finished that? Feeling a little touched? Okay, good, it’s time to talk about those special editions we mentioned. The first one is known as the Unrelenting Edition (a very fitting title) and contains the game’s physical edition, the “Defiance of Dissonance” soundtrack digital download, a mini art book, and a reversible coversheet. All of that is available for preorder right now at just $59.99. Sounds pretty good, right? Well, the next one is even better.

The full Disgaea 6 Limited Edition is exclusive to the NIS America store, costs $99.99, and comes with: 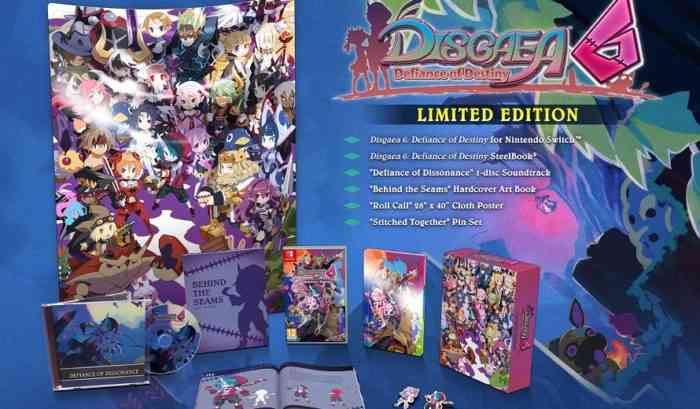 Now that’s what we’re talking about! The art of Disgaea is always fantastic, so any excuse to get our hands on another artbook is a good one.

Will you be playing Disgaea 6: Defiance of Destiny this June? Let us know down in the comments, or hit us up on Twitter or Facebook.

Hollow Knight: Silksong Will Be Playable on Both PS4 & PS5
Next
Physical Copies of No More Heroes 1 and 2 Coming to the Switch
Previous
Zombieland: Headshot Fever Aiming For Spring Release Date