Two Console Classics Get a New Lease on Life

Did you know that Nippon Ichi Software makes games other than Disgaea? It’s hard to believe, but it’s true–from time to time, they produce standalone games with a similar cutesy art style and dark comedy sensibilities. Unfortunately, because these games are standalone, they tend to be lost to the mists of time in a way that the constantly re-released Disgaea games aren’t. So when we heard about Prinny Presents NIS Classics Volume 1, we were already pretty excited. Then we learned that Soul Nomad & The World Eaters, one of the best and darkest SRPGs the company has ever produced, is finally getting an English re-release over a decade after its initial 2007 publication. We are now officially hyped.

In case you’re a newcomer to non-Disgaea NIS games, here’s a quick rundown of both titles. Phantom Brave tells the story of Marona, a young girl who can channel the spirits of the dead. This earns her the dreaded title of ‘The Possessed’ and leads her to be hated and feared by others, even though she’s never done anything wrong, but it won’t stop her from trying to make the world a little brighter. Accompanied by the undead Ash, a friend of her deceased parents who basically raised her, Marona works as a Chroma–an all-purpose problem-solver–which is fitting, considering that her world is about to run into a ton of problems. It’s a game that’s melancholy, funny, and heartfelt in equal measure.

Soul Nomad & The World Eaters, meanwhile, is probably the darkest of any NIS game (and yes, we are counting Disgaea’s bad endings in that statement). This game begins by having the protagonist pick up a cursed sword and be immediately possessed by the weapon’s malicious occupant: Gig, the so-called Master of Death, a cruel and sadistic god who almost destroyed the world 500 years ago, and who makes no attempt to hide his plans to take over your body and finish the job. Fortunately, your will is strong enough to save you–at least, for now–but as you set out into the still-devastated world to find and kill the World Eaters, Gig’s Godzilla-sized monstrous former minions, you find yourself with no choice but to rely on Gig’s power. To save the world, you must build yourself an army and prepare to take on slave traders, apocalypse cults, and misled empires on top of the cataclysmic World Eaters. And in the Demon Path, unlocked on New Game Plus, you get to see what happens when the savior of the world turns on it. Yes, we are saying that Soul Nomad had a genocide ending long before Undertale was a thing. That alone makes it worth checking out. 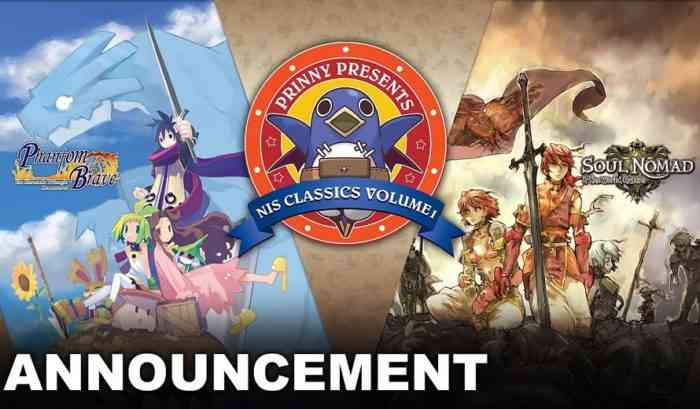 This re-release contains all the unique gameplay mechanics, memorable characters, and DLC from the original releases, as well as up-scaled artwork. That’s over 60 hours of SRPG action for each title. We’re living for it.

Prinny Presents NIS Classics Volume 1 will be available on Nintendo Switch in Summer 2021. A limited edition is available for preorder at the low, low price of $99.99 US.

What’s your favorite NIS game? Let us know down in the comments, or hit us up on Twitter or Facebook.