Have you ever gotten frustrated playing a strategy RPG? Thought to yourself that things are just moving too slow, that there are too many stupid rules? Do you love grinding for levels so much you never want to stop if you don’t have to? Welcome to the world of Disgaea.

This newest entry in the Disgaea franchise stars Killia, a badass Overlord on a quest for revenge. His target is a warmongering emperor named Void Dark, a demon currently busy taking over all of the hells, or netherworlds, that exist. If you played Disgaea 5 when it came out on PS4, all of this is old news. The Nintendo Switch edition is mostly the same game. The major difference is the inclusion of all the DLC. If you’re so inclined, you can unlock a huge cast of characters from every game in the series before finishing the first level.

I would argue that this is the best way to play Disgaea 5. Mainly due to the delicious power advantage this affords you. Killia went from my strongest character to my 12th-strongest character before I finished half the bonus content. This feeds into one of the ‘problems’ with Disgaea. It’s all too easy to get paralyzed by choice. You can have ten people on the battlefield at once. Seems like a lot, right? Nope! In addition to the [x number of] story characters, you can make your own units. Any class of fighter or monster you encounter you can eventually unlock. So, choosing your main party ends up a rather frivolous affair. My top ten are based half on skills and half on total nonsense. I like the way Flonne’s special moves look on screen, so she’s in my party. It’s the same with the monster classes in rotation. The weapons they turn into are totally sweet, so they stay on staff at all times.

“It’s all too easy to get paralyzed by choice.”

One problem I had with the DLC came about because I blew through it at the very beginning of the campaign. In the story’s beginning, Killia is a gruff, ruthless fighter focused entirely on vengeance. He has the smallest, begrudging regard for other people but he’s reluctant to show it. In the DLC, Killia is a considerate, civic-minded Samaritan who’s ready to help anyone in need. This makes no sense whatsoever when compared to his actual early-chapter personality. Aside from this bizarre in-congruence, the extra content is a welcome addition. 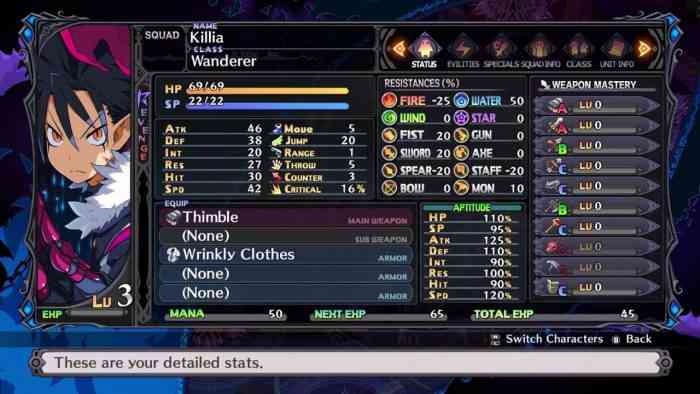 For those of you who have never played a Disgaea game before, there’s a simple primer here. If you’re morally opposed to links and the clicking of them, I’ll break it down for you:

Disgaea games are strategy RPGs, right? Except most strategy RPGs have you plan moves very carefully, restrict your movement on the battlefield with arbitrary rules and are generally slow, measured affairs. This series chucks all of that out the goddamned window of a speeding car that is also on fire. You wanna move around the map really fast? Equip three pairs of shoes or stack all of your fighters in a tower. You wanna get really strong? Complete the dungeons in all of your items, raise and combine the inhabitants to their max levels, reincarnate your fighters over and over, steal god-tier weapons from powerful foes and pass laws that change how much experience you get from fights. Hate that turn-by-turn crap that makes battles take a thousand years? Have all your fighters attack the boss at the same time or combine all the enemies into one by throwing them into each other. Want stronger items in the shops? There’s a bill in the senate for that. Want to unlock the secret dungeons at the end of the game? There’s a bill for that too. Need to grind levels like crazy? You’re in luck!!! Every single game in the series comes equipped with a level designed to be beaten as fast as possible, over and over again, for the optimal acquisition of that sweet experience. Disgaea is the game built specifically for players who love finding that little exploit in the system, except the exploit is the entire game.

There’s things I still haven’t covered, of course. Monsters can turn into weapons for two turns, boosting your stats. There’s a weird board game you unlock that gives permanent boosts to your base stats, making you stronger than before when you reincarnate. Your special moves, weapon and magic proficiency can be leveled up. You can learn new skills and ‘Evilities’ which give you more boosts to your combat prowess. There’s more than that, even. The point being that players interested in optimization and micromanagement will find a lot of fertile soil here.

“If this is your entry point, you’ve picked a good one.”

Complaints about this entry in the series are the same as they’ve always been. If you’re still invested in the Disgaea series by this point, you’re obviously accustomed to savage levels of grinding and wobbly, paper-thin stories. If this is your entry point, you’ve picked a good one. The DLC characters cover every major entry in the series, absorbing almost fifteen years of history into a single cart. One of the only big issues I have with this, and by extension all of the games, is the high-level combat. Once you get past a certain point, battles become lightning-quick duels. Two fighters get in range and whoever attacks first is the one who lives. All of the strategy associated with RPGs like this one is cast by the wayside. The post-game content is an episode of Dragonball Z compressed into fifteen seconds. Someone powers up, there’s a flashy cutscene with their special move, and the loser is reduced to glittering scatters of dust. All of the strategies you build throughout the game dissolve in the postgame grind. Beyond that, my only beef is with the grind itself. But this is a lovers’ quarrel. I’ve sunk so many hours into the pursuit of perfection, my grievances ring hollow. The only problem with grinding in this game is you feel compelled to do so much of it.

If you’ve played Disgaea 5 before, you may find little to justify purchasing the game again. Yet, if you’re a fan of this series, the siren song may call you regardless of how many hours you’ve sunk in already. Between the DLC and the Switch’s portability, there’s a lot of new life breathed in. On the other hand, if you’ve never played this game before, this review is more of a warning. Spend your money wisely, for countless hours can vanish in a blink. The simple graphics and cheeky dialogue conceal a vast, murky ocean of gameplay. Before you know it the sun will be rising and you’ll be bargaining for one more turn. Choose wisely, for the portable power of the Switch means this compulsion can follow you anywhere.

***This game was reviewed on the Nintendo Switch***