Hitman 3 Roadmap Shows off Content, Both Paid and Free

As far as post-launch content for Hitman 3, we know that there will be regular updates and fun bonus missions, but we are still waiting to see if there will be any new locations or big ticket items. Today, IO Interactive released a Hitman 3 roadmap video for this month’s updates. A couple of these items are for all players, but there is also a couple of missions exclusive to holders of the Deluxe Edition, contents which you can check out here. What players can expect this month is a couple of Deluxe Escalation missions, Escalation missions, an Elusive Target, and some guest missions. 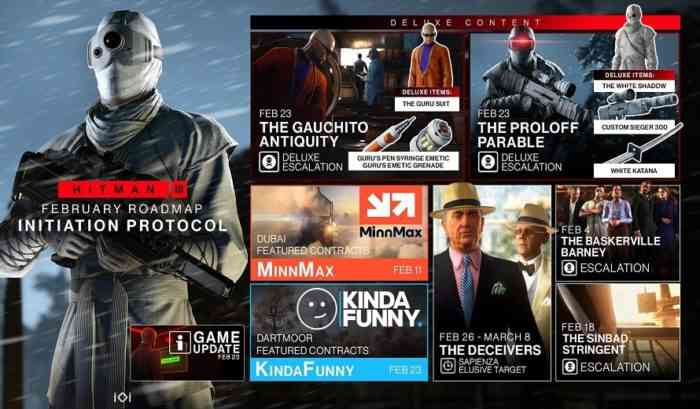 The Elusive Target is a twofer. It takes place in the Hitman 1 area Sapienza and will run from February 26th to March 8th. This will require you to take out two targets called The Deceivers. The Deluxe Escalation missions called The Guachito Antiquity and The Proloff Parable will be introducing some new weapons and outfits, including a syringe-pen, poison grenade, and white katana with matching stealth suit. All of these things are jammed into this month, so get going! Hitman 3 is available on PC, PS4, PS5, Xbox One, Xbox Series X, and Nintendo Switch.

Will you be trying these missions? Let us know in the comments below.