GTA Online is a place where you can pretty much do whatever you want. You can cruise around with your posse, hold up convenience stores, race in fantastical vehicles on architecturally impossible tracks, and you can punch your friends for no reason. But what if you had a reason? Now you do! Rockstar Games is introducing the not-Volkswagon Beetle, the BF Weevil. Rockstar describes it as “a marvel of midcentury design and economic efficiency, but like a venture capitalist shedding their two-piece suit for a set of prayer beads and tie-dye, the Weevil has since become a symbol of free love and other high-minded ideals. Whether you’re using it to move your cult up into the foothills of the Tataviam Mountains or schlepping your red-eyed pals down to a party at Vespucci Beach, the Weevil can help get you there.” 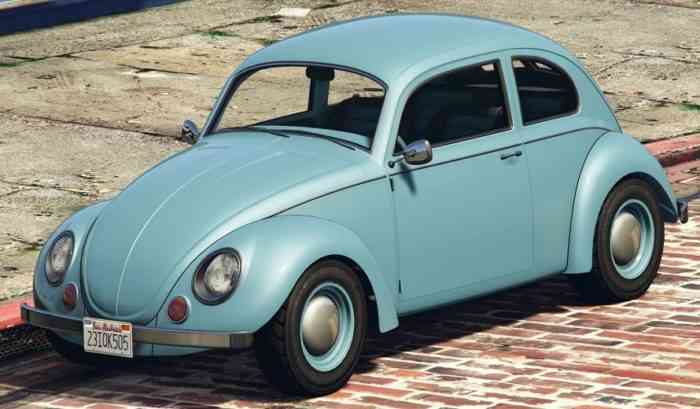 Rockstar is also offering bonus rewards for certain gamemodes and missions. In the battle royale mode Motor Wars, players will receive 3x the cash and RP for participating. 2x the cash and RP will be awarded upon completing Smuggler Sell Missions, and 3x cash and RP will there for placing in Air Races, so brush up on your flying. There are also some special clothing items for logging in and playing Cayo Perico Heist missions, and for those who participated in the Heist Challenge in November.

Money is worthless if you don’t spend it, but it’s worth more if you get extra mileage out of it. Luckily, Rockstar is also discounting a number of aerial vehicles between 25%-40% off, as well as hangar customizations and add-ons. These discounts and bonuses above will only be lasting for this week, so get to it! GTA V is available for PC, PS4, and Xbox One.

Will you be claiming any of these items or taking advantage of these discounts? Let us know in the comments below.