Ever since the massive success of Dead by Daylight, a lot of games have been jumping onto the multiplayer horror craze, and Devour is the latest, putting your team in the shoes of cult members trying to take down the demonic Azazel.

“As once devoted cult members, players in DEVOUR must steel themselves and work together to stop their cursed leader Anna Puerta from unleashing an unspeakable evil. With the goat demon Azazel possessing her after a ritual gone horribly wrong, Anna’s rage and power will grow with every step the players take in DEVOUR. In a race against time, the players burn ritual goats, evade a growing legion of demons, and ultimately hope to break Azazel’s hold over Anna. “

The trailer doesn’t give us much in the way of new information, but we do get to see more of the demonic stalkers in action. There isn’t much new as far as the design goes, but they’re still creepy; Anna, the main villain, is tall and emancipated, and the demonic hordes at her command are covered in burns. In fact, burns seem to be a recurring theme; to combat Anna you have to burn ritual goats, and you can fight off – or, at least, slow down – the demons hunting you down with UV lights. It looks like developers Straightback Games are leaning into the uncanny valley effect, with jerky movements like something out of The Ring. 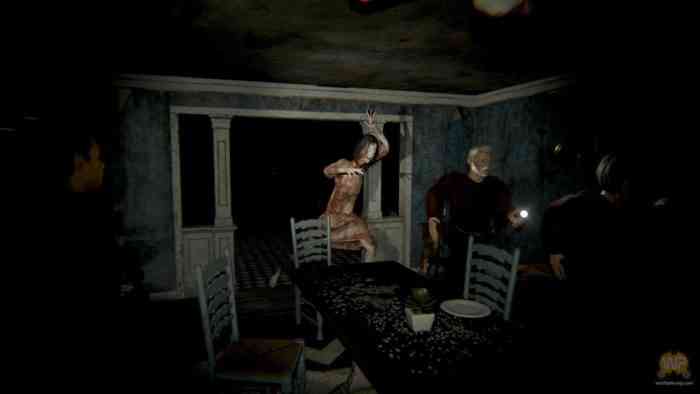 The game’s out now on Steam, and have a rating of Very Positive, so if you’re looking to scare up a game night, it looks like you could do a lot worse. Time will tell how Devour will stand up to genre juggernauts like Dead by Daylight, so if you have the guts to check it out why not tell us what you think in the comments, on Twitter, or on Facebook.