The Steam Autumn Sale Has Begun

Steam is highly regarded as one of the best, if not, the best, client for PC gaming. Perhaps its most notable feature is the ever-exciting Steam sale. While many believe that Steam sales in general have fallen from their former glory, Steam sales still offer a lot to be excited over. Well, it’s that time of the year again, and the Autumn sale is now live! 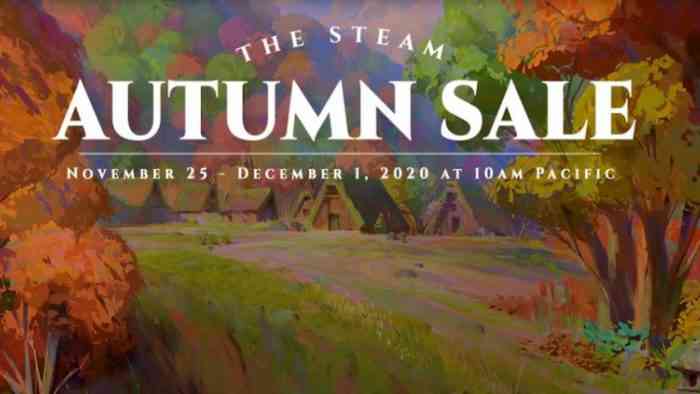 The Autumn sale is one of the few seasonal sales Steam hosts throughout the year, including the Spring, Summer, and Winter sales. While the Summer and Winter sales are usually the big ones for the year, lasting two weeks–there is still plenty to look forward to in the one week Autumn sale.

Right now you can find a variety of games across every genre on sale. Some notable titles that released earlier this year are 50% off Marvel’s The Avengers, 60% off Dragon Ball Z: Kakarot, 67% off Doom Eternal, 10% off Phasmophobia, and 20% off the latest entry in the Jackbox series, Jackbox Party Pack 7.

Indie game fans can find discounts on popular titles such as Celeste, Hades, Monster Train, and Rogue Legacy 2. Star Wars fans can find deals on almost every game in the series available on Steam, including 40% off the recently released Star Wars: Squadrons, and 60% off Star Wars Jedi: Fallen Order.

There are way too many games to highlight here so instead of wasting your time and mine by listing them all out, take it upon yourself to check out the sale. I strongly recommend hitting up your wish list and seeing what deals you might find on games you’ve been wanting to get for a while now. The Autumn sale only lasts one week and will be over on December 1st so make sure to take advantage of it before it’s too late. That being said, if you do need to wait, the Winter sale shouldn’t be too far behind.

You can check out the steam sale and all it has to offer on the site’s homepage.