TERROR SQUID Will Drive You Mad

Create Your Own Bullet Hell

I’m just gonna say it: gamers love Cthulhu. Whether it’s the big octopus-face himself in the rubbery flesh or other terrifying denizens of the deep brought to life by the desperate spasms of a dying mind, we can’t get enough of that delicious cosmic horror. We’ve had Lovecraftian RPGs, first-person horror games, and even a cameo in Smite. But you know which mind-bendingly complicated, maddeningly difficult genre really demands a Lovecraftian presence? Bullet hell! Apt Games’ TERROR SQUID follows in the slimy, doomed footsteps of greatness and presents a vectorized nightmare. With a thumping synthetic soundtrack, eye-gouging bright colors, and a trailer that will make your stomach churn, this is one game that will make your head spin–and that’s before the cosmic bullets start flying.

The premise of TERROR SQUID is simple: you are a cosmic creature of chaos circling a doomed world, dropping magical carpet bombs. Every game mechanic is linked to these bombs, and it is glorious. No tightly-choreographed patterns here or memorizing the only safe spaces on the screen here. There is only adrenaline and terror. Your goal is to survive for as long as possible in a maze created by your own projectiles. Last long enough and you can release a burst of primordial dark energy, detonating everything in glorious chain reactions. TERROR SQUID is a disturbingly addictive test of reflex and strategy inspired by the likes of Super Stardust and Devil Daggers.

Creative Director Syver Lauritzsen puts it like this: “With TERROR SQUID we wanted to make a hypnotic score-attack game that’s easy to grasp, but difficult to master.”

Fair enough, but where’s the horror?

“We also wanted it to feel haunted, just as the best 80s arcade games infect your brain in ways both terrifying and entrancing,” he continues. “Become one with the TERROR SQUID.” 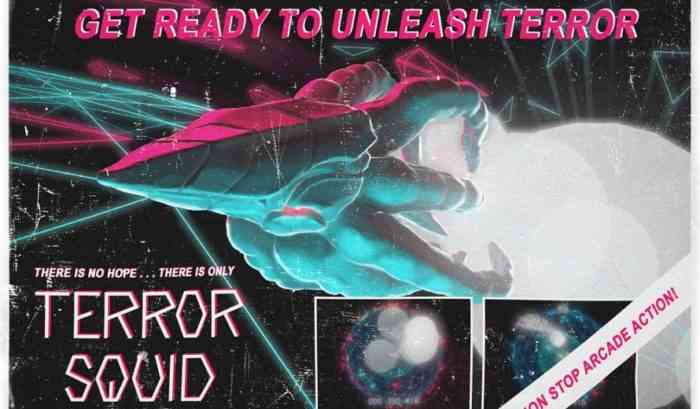 Released as an arcade cabinet in 2019, TERROR SQUID won the 2019 Norwegian Gameplay Championships and a permanent spot in Oslo arcade bar Tilt, where it hypnotizes players and devours tokens. This October, it’s slithering into PCs and the Nintendo Switch. Surrender to the darkness and become one with the void on October 15th, 2020.

There is no hope. There is only TERROR SQUID.

How do you feel about bullet hell games? Let us know down in the comments, or hit us up on Twitter or Facebook.