Winter is Here… on Steam

At long last, it’s arrived – the award-winning A Game of Thrones: Board Game now has a digital edition, available on Steam today! This 10 round strategy game will see players compete against each other and Westeros itself for the ultimate prize. The juggernaut fantasy franchise which has affected everything from Halo to Kingdom Hearts needs no introduction, but that won’t stop us from waxing poetic about it anyway. Based on the gritty A Song of Ice and Fire novels by George R. R. Martin, A Game of Thrones has become a multimedia empire, spanning books, television, Funko Pops, board games, and yes, even video games. A Game of Thrones: The Board Game – Digital Edition may be quite the mouthful, but it’s certainly a worthy addition to the series’ legacy. As we predicted earlier by staring deep into the flames – okay, it was a press release, we’re talking about press releases – Digital Edition was developed by Dire Wolf Digital and produced by Asmodee Digital, and they did a fantastic job bringing Westeros to life. It’s also 20% off before October 13th. The Iron Bank approves.

The game picks up at the story’s first major turning point: the death of King Robert. In the aftermath, six factions march on the Iron Throne. Choose to play as Stannis Baratheon, the Starks of Winterfell, the Ironborn, the Lannisters, the Martells, or the Tyrells, and fight, ally with, or betray the others in online multiplayer. But don’t get tunnel vision – players aren’t just at the mercy of each other, but the harsh and unpredictable land itself.

Random events will affect gameplay each turn, forcing you to adapt quickly. The Wildlings could push down through the Wall at any moment, and if the Night’s Watch falls, the consequences will be dire. It all plays out like a high-stakes game of Risk, except you can actually tell what’s going on, and there’s no risk of your cat jumping on the table and knocking all the pieces just as you were about to taste sweet victory. Thanks, Patches. 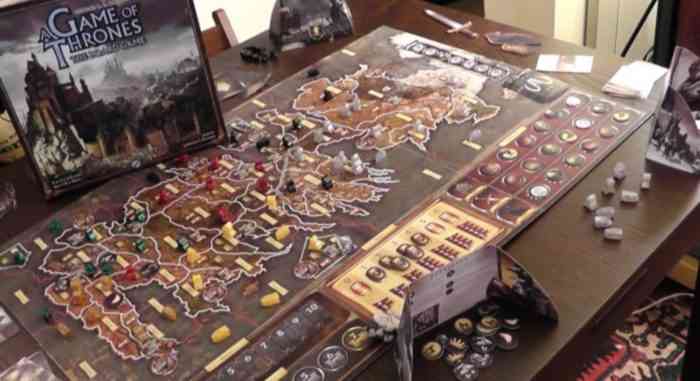 Do you dare try for the Iron Throne? Let us know your pick down in the comments, or hit us up on Twitter or Facebook.