Winter Is Coming: Frostpunk The Board Game Smashes Kickstarter Goal

It’s Going To Get Frosty

The link between tabletop games and video games is a vital part of the modern games industry. Tabletop RPGs laid the foundation for titles like the Elder Scrolls series, and even today we are seeing multiple games step from the table to consoles. Now 11 Bit Studios’ hit strategy game Frostpunk is making the leap in the other direction, with Glass Cannon Unplugged developing Frost Punk: The Board Game. 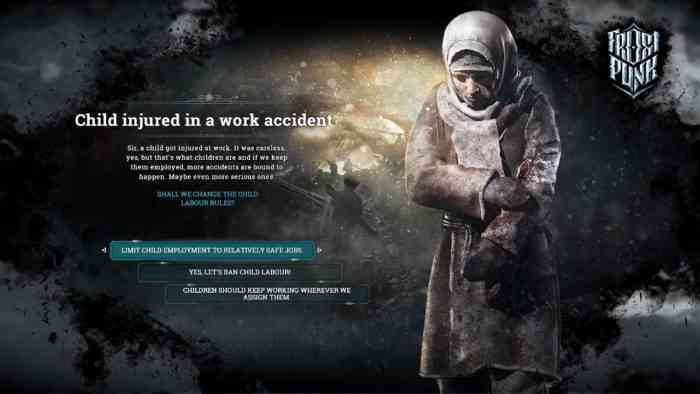 We absolutely loved the PC and console versions of Frostpunk, enjoying the gratifying struggle for survival, and with the last DLC already released, the craving for more Frostpunk had begun. The Frostpunk: The Board Game project was announced with a Kickstarter campaign which reached its funding goal in 54 minutes, finding 3000 backers and exceeding the 200,000 Euro goal. Now the creatives behind Frostpunk: The Board Game have got their sights on some impressive stretch goals including a one-of-a-kind companion app to accompany the game.

The video game version had players managing a city with a dying population including workers, engineers, and children. Your task is to keep your population warm and hopeful, but every decision could bring disaster in a game that required a great deal of patience and skill. The unplugged adaptation looks to ease the learning curve by including different player roles to welcome newcomers, however that doesn’t mean they are dumbing things down. Expert strategists will find plenty to love in Frostpunk: The Board Game as they get to grips with laws and consequences, unique technologies, and even a weather tracking mechanic.

The kickstarter video shows off Glass Cannon Unplugged expansive vision for Frostpunk: The Board Game, with what looks like hundreds of unique board game pieces and all manner of cards representing your decision making, story elements, and game-changing developments. They have certainly retained the video game’s grim sensibilities, this in not a game for the faint of heart as the footage shows game cards with messages such as “LITTLE HERO – This child died on its work post. Its sacrifice will be remembered”! If you enjoy a challenging strategy game and beautiful tabletop design, then this is definitely one to keep an eye on!

What video game do you think would make an excellent tabletop game? Sound off below!


This War of Mine 8 Year Anniversary Initiative to Aid Ukraine