Marvel and Fortnite are undeniably two of the most well-known and popular brands in entertainment, and they have a history of collaboration that has delighted fans. The upcoming Marvel Knockout Super Series will continue that collaboration, with exciting opportunities for player to grab exclusive skins. 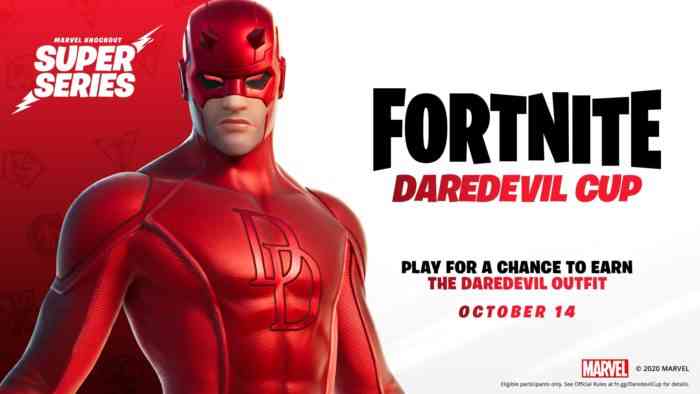 Marvel and Fortnite have been cross-promoting for a while now, from adding and Avengers Endgame skin for Captain America to offering custom pickaxes for fortnite players who had tried the beta for Crystal Dynamic’s Marvel’s Avengers. The newest collaboration is tied to an in-game tournament beginning on October 14th: The Marvel Knockout Super Series – a one off expansion of the Marvel Knockout game mode.

The Marvel Knockout Super Series is a bracket-style tournament with 4 cups, based on the classic Fortnite knockout mode in which 16 teams compete in pairs of trios. In the Marvel variant, teams will get randomly assigned superpowers which are mirrored by the opposing team. These powers can be offensive – such as Wolverine’s Claws, defensive – such as Black Panther’s Kinetic Armour, or movement based – such as the Silver Surfer’s Surfboard. While not offering the range of power or customisation as Marvel’s Avengers, this game mode offers some fun new strategies and an interesting twist on the Fortnite formula.

The first round of the Marvel Knockout Super Series is themed around Daredevil: Marvel’s man without Fear. A fan favourite character who gained more public renown thanks to the Netflix TV series with its iconic raid-inspired hallway fight, Daredevil was the first blind superhero in comics when Stan Lee first introduced him back in 1964. The top teams in each region will earn the Daredevil skin to use in other game modes before it becomes available in the item shop at a later date.

The tournament is split into 7 regions, with North America being split into East and West, the remaining five regions being; Europe, Brazil, Asia, Oceania, and the Middle East. Interestingly, the prize will be awarded to the top 800 teams in Europe, the top 500 in Eastern North America, top 200 in Western North America and Brazil, and the top 100 in the remaining regions. This is likely due to the size of the player base in each region, but an interesting window into Fortnite’s numbers.

The Daredevil Cup is just the first announced of 4 different rounds, presumably with different skins unlockable in the next 3 rounds. No word yet on which heroes they will feature, perhaps Epic is assembling the Defenders in the same order Netflix did? That would mean the next 3 rounds would feature Luke Cage, Iron Fist, and Jessica Jones.

What hero skins would you like to see in Fortnite? Let us know in the comments.

Brawler Battle Royale Rumbleverse Fights To Launch In Mid August
Next
COG Considers: Pour One Out For Level-5
Previous
Two New Doctor Who Games are On the Way