Datamining sometimes uncovers some juicy things, especially in games where you know there is an enormous wealth of untapped content like Marvel’s Avengers. A while back, datamining revealed a ton of post-launch heroes. After the most recent update, in which a bunch of bugs had been squashed, some players did another sweep of the files and found some new stuff, which corroborate some of the previous claims about new heroes. A series of screenshots show a ton of early UI concepts like maps and icons, but some of the icons point us toward factions and characters that we have not yet seen, but would very much like to. 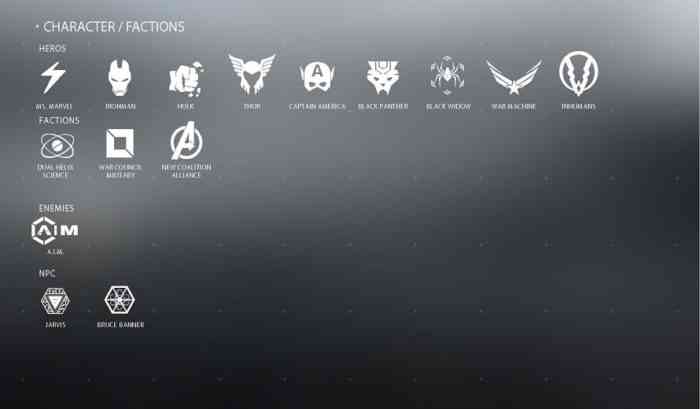 This particular screenshot holds a lot of information. We see the Black Panther icon (which had been teased in a previous War Table presentation), a War Machine icon (which has not outright been revealed, but was alluded to in a previous datamine), and Black Bolt’s icon labeled as “Inhumans”. There’s a lot to unpack here. Almost all the heroes’ icons appear to be early concept drafts, as the ones in the final game are different. The Inhumans icon is most interesting for me, because it alludes to a larger faction, which is the Inhuman Royal Family.

The Inhuman Royal Family is lead by Black Bolt and Medusa, but have other connections to important Marvel characters, such as one of the game’s main characters Kamala Khan. The Inhumans existed before the Inhumanity comic book arc that gave Kamala her powers, so perhaps Black Bolt and the rest of the Inhuman Royal Family exist in Marvel’s Avengers already. Hopefully, future DLC will expand on this. Marvel’s Avengers is available now for PC, Stadia, PS4, and Xbox One.

What do you hope comes from future DLC? Let us know in the comments below.

Marvel’s Avengers Delayed on Next Gen, Hawkeye DLC Delayed Too
Next
A Silent Hill Legend Comes to Dead by Daylight
Previous
Yakuza: Like a Dragon Brings RPG Party Gameplay To the Series