Today came with some news concerning The Walking Dead: Onslaught, even more so for excited fans of the series that are VR-ready. If you have been anticipating the release of this game, the new gameplay trailer has revealed the release date. It will be coming out just before the finale of the AMC show’s current season. Since the game takes place in the gap between season 8 and 9, it won’t prep you for the show, but it will get you into the roles of some of the iconic characters. 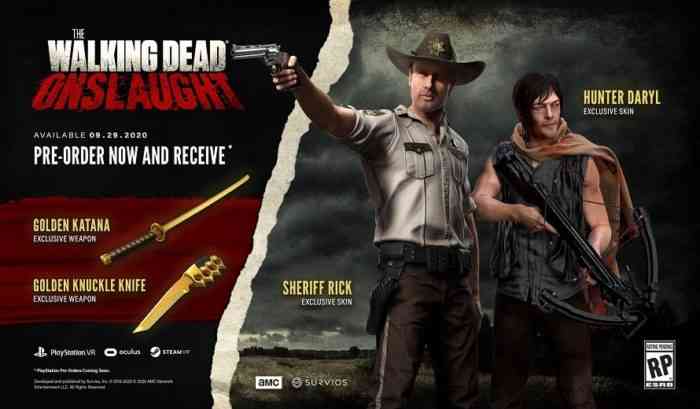 Along with the trailer, developer Survios also released information about the pre-order and deluxe content. Pre-ordering The Walking Dead: Onslaught will get you a bunch of skins; two character skins and two weapon skins. The character skins will give you Sheriff Rick for Rick Grimes to give him the look of the early days of the show. You will also get the Hunter Daryl skin for Daryl Dixon. This shows Daryl with shorter hair and the poncho he wears in season 3. It’s kind of weird for a VR game to have different character skins since you never really see yourself, but thankfully there are also weapon skins. Carol’s knuckle knife and Michone’s katana get golden makeovers, as well.

The Deluxe Edition of the game will get you some cool exclusive weapons as well. Later in the show’s run, Rick uses a mace, likely made in the Kingdom, which players can use. Tyreese’s hammer also comes with the Deluxe Edition. Some more recognizable weapons include Negan’s iconic barbed-bat Lucille and a red machete called Mandy, which Rick uses for a while. Mandy is named after a survivor in a webseries called The Walking Dead: Red Machete. The Walking Dead: Onslaught comes out on September 29th for Oculus, Steam VR, HTC Vive, and PSVR.

Which edition catches your eye? Let us know in the comments below.