One good stab deserves another. That’s the saying right? Well, The Walking Dead: Saints and Sinners is being received pretty well, so why not have another TWD VR game? That’s what The Walking Dead: Onslaught is, except it is set within the AMC universe that the show takes place in. Players will take on the roles of the popular characters Rick, Michone, Carol, and Daryl, and use their own signature weapons. There has been a teaser trailer out for a while, but today we get a look at the gameplay trailer. 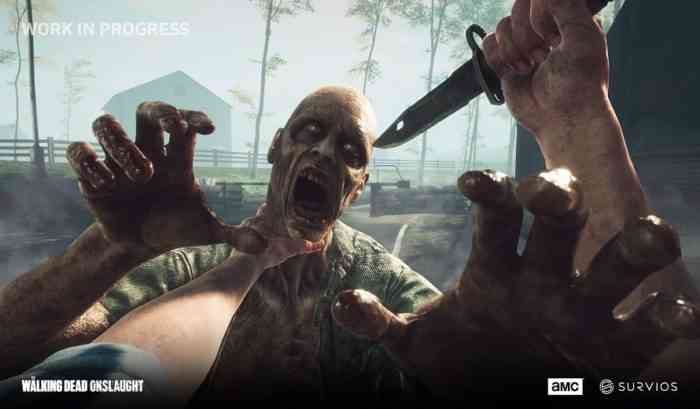 It seems like of cinematic to be a gameplay trailer. There’s a lot of the player look at their weapons before and after striking, cool knife-flips, a lot of intentional camera-shake that a player would probably not experience when actually playing the game; stuff like that, so is it true gameplay? *shrugs* It looks pretty cool though. There is also a fair amount of VO from Rick Grimes and Daryl Dixon. Norman Reedus is confirmed to be reprising his as Daryl and Rick’s voice sounds like Andrew Lincoln, so we very well may get the original actors back in these roles. The trailer shows a lot of walker-killing, in ways that are not nearly as careful as these characters normally operate, but I guess that’s okay. We also see an armored walker like the one named Winslow the Scavengers kept in their junkyard.

The trailer ends with a recreated shot of the famous image of the walkers behind the double doors with the words “Don’t Open, Dead Inside” written on it, which are also famously memed “Don’t Dead, Open Inside”. The Walking Dead: Onslaught will be coming out on September 29th for Oculus, Steam VR, Vive, and PSVR.

Will you be trying out Onslaught? Let us know in the comments below.