Normally, a flaming cowboy would be a member of the Village People, but the only Y you’ll see him at is Purgatory, Wyoming. Damn, that’s one of the best openings to an article I’ve done in a while, and West of Dead deserves that kind of excitement. It stars Ron Perlman as William Mason, the gunslinger with the flaming skull. He explores Purgatory, Wyoming, (which is a real place; Purgatory Gulch in Wyoming) but this setting takes the name a little farther than its real life counterpart. 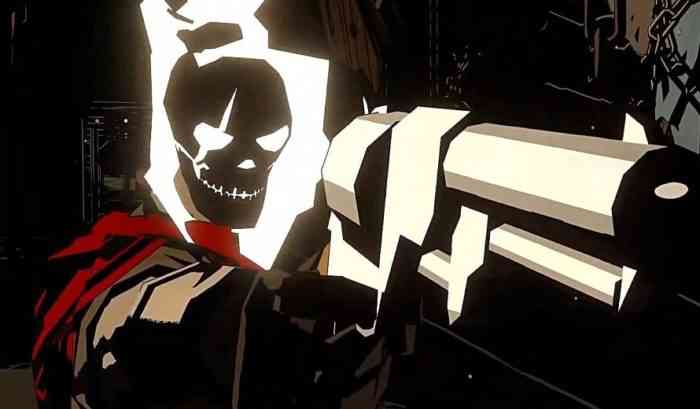 Developer Raw Fury announced West of Dead in November at X019. Yesterday’s trailer finally announces the release date, and it is soon. Like, next week. This twin-stick, Western, cel-shaded RPG-shooter will be out on Xbox One and PC on June 18th. If the trailers are any indication, the game is bound to be full of monologues like “they say [common phrase]… I guess they [something contradictory]”, which is a hallmark narrative tool of any good Western. This new trailer shows quite a bit more gameplay than the previous one and we see some nifty gameplay mechanics like sliding over and taking cover behind the environment, as well as using ricochets to bounce bullets around corners to kill your enemies.

The art style plays into the gameplay. The areas are procedurally generated and the cel-shaded style makes it kind of difficult to see in the dark, which will force the player to keep moving and find cover using the light of lanterns and William Mason’s own flaming skull. West of Dead will be coming out on June 18th for PC and Xbox One, and will also be coming to PS4 and Nintendo Switch on August 5th.

Will you be trying out West of Dead? Let us know in the comments below.

Kayak Across the Seas in Kayak VR: Mirage
Next
Sea of Thieves Has Experienced a Huge Surge in Active Players Since Moving to Steam
Previous
Battlefield Has Returned to Steam Once Again