Konami Releases Skelattack, a Metroidvania With a Role Reversal Twist

Skully and Imber vs the Hollow Knight: Who Would Win?

Konami, publisher of several major video game franchises including Castlevania, Dance Dance Revolution, and Metal Gear, is now turning more of its attention towards developers in Europe and in the Americas. Marking Konami’s first step in this direction is the release earlier this week of 2D action-platformer Skelattack, developed by Californian indie studio Ukuza, for Nintendo Switch, PlayStation 4, Xbox One, and PC (via Steam).

As a Metroidvania-type game, Skelattack features gameplay that is already familiar to many players.The premise of the adventure, however, is rather unusual: for once, humans are the antagonists, who have invaded the underworld of Aftervale and stolen the Blue Flame that keeps the undead alive. Playing as the enchanted skeleton Skully and his adorable bat friend Imber, players will have to “jump, slash, and flap” through various realms of the underworld to save the Blue Flame from the humans’ clutches. 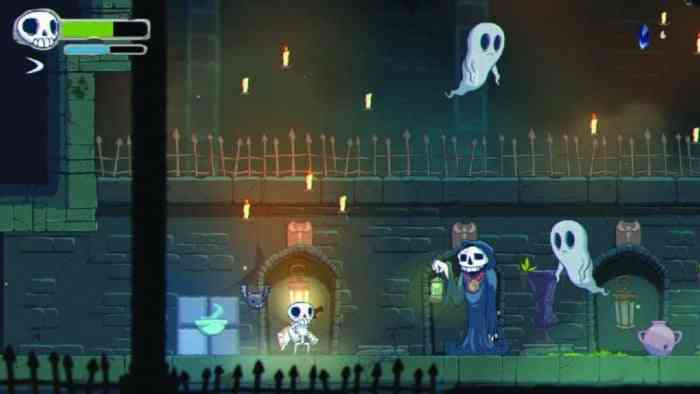 The game, with its charming, hand-drawn art style and quirky setting, is reminiscent of Team Cherry’s Hollow Knight, albeit against a brighter, more light-hearted backdrop. Check out some gameplay clips in the PS4 launch trailer below:

In creating the human antagonists, who come off as over-the-top parodies of classic RPG adventurers, Ukuza said they looked to movies such as Monty Python and the Holy Grail for inspiration. The same absurd sense of humor comes through in — for example — a humorous confrontation between Skully and a bard-and-warrior duo. The bard sings of his and his companion’s heroism and how they are about to vanquish their undead foe, while Skully looks on with arms crossed, totally unimpressed.

“Yikes. That last part was pretty weak, friend”, he snarks, to the outrage of the bard.

Whether you’re someone interested in how Skully and Imber’s journey plays out, or simply a passerby looking for the next platformer challenge, Skelattack should be worth a peek.

Sea of Thieves Is Reducing Milestone Requirements After Fan Complaints
Next
Call of Duty Doubles Down on Black Lives Matter Pledge
Previous
Tropical Paradise: Fortnite Season 3 May be Filled With Water, Islands, and Boats