I love the Metal Gear series. Series creator Hideo Kojima has never been afraid to buck expectations, and the way he is able to win the hearts of gamers even in the face of situations like the Raiden bait and switch in MGS2 is truly impressive. Let’s get something out of the way though. Metal Gear Survive is NOT a Metal Gear Solid game. It has some of the elements of those titles, but if you want the next chapter in the saga of Big Boss, The Patriots, and that other (fantastic) Kojima nonsense, this ain’t it.

Well, what is it, then? I’ve played the damn thing for a whole bunch of hours now, and I still don’t really understand. One second I’m in a thrilling conflict, the next I’m bogged down by repetition and questionable balancing. My feelings have waffled more than a chef at Roscoe’s, so I’m going to round them all up and we’ll see where we are in around 1000 words.

The first surprising thing about Metal Gear Survive is the story. First, there actually is one (yay!), but second, it’s generic as can be (boo!). Here’s the gist of it. After XOF trashed Mother Base at the end of Metal Gear Solid V: Ground Zeroes, some seriously wacky stuff went on. A wormhole opened above the base, and sucked into another dimension called Dite. You play as “The Captain”, a custom character who avoids getting pulled into the vortex, but passes out and wakes up months later in a predicament of sorts. Crystal headed zombies called Wanderers populate Dite, and *GASP* you’re infected with the virus that causes the zombie-ing. Mysterious mission giver Goodluck says you have no choice but to help him out with saving Dite to have a chance at survival.

That’s kind of all you’ll need to know – everything else is a mixture of predictable twists and some nonsense pseudoscience that’s clearly aiming at Kojima’s famous style but falling far short. None of the characters are particularly memorable outside of your Base Camp’s AI, which speaks absurdly slow and has some maddening quips to offer when you fail to ‘survive’. 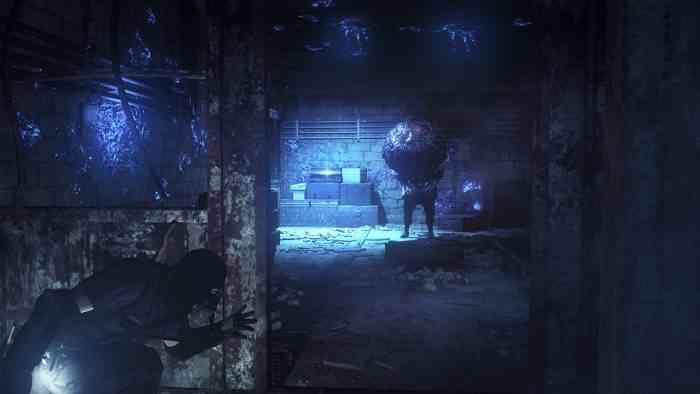 The intro to Survive is drawn out and permeated with tutorials; it knows that no one will understand what’s going on if they’re expecting Metal Gear Solid. It does pay some homage to Kojima’s obsessive focus on cinematic experiences – the FOX engine still looks/runs great, by the way – but it lacks the WTF moments that have made past Metal Gear games so engaging and endearing.

Mechanically, the systems in Metal Gear Survive have been bolted right on top of The Phantom Pain’s core. The movement, shooting, and sneaking are all the best kind of familiar, and even the previous game’s iDroid interface has made the jump. There are, however, some tweaks that are arguably more damaging than progressive as an action game. Therein lies the secret: Survive is a hardcore survival game first, and everything else a distant second. 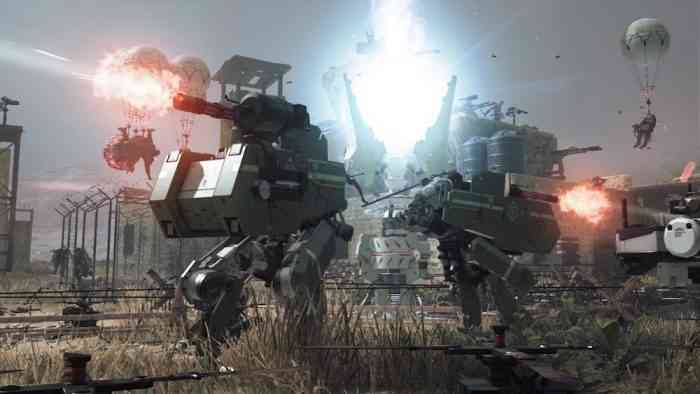 The scale of the game is hard to get a grasp on thanks to the map system and cloud of ‘Dust’ that covers a big portion of it. The map on your iDroid only fills in ground you’ve covered once you return to Base Camp, and while you’re in the dust that can mean trouble. The dust makes it hard to physically see where you are or are going and also forces you to consume an oxygen tank while you’re in it. You’ll have no compass or waypoints (unless the map is filled in), meaning you’ll need to rely on your wits and making extended exploration in the dust risky. Resource management in the context of the dust was exciting and defined the times I had the most fun with Survive. Could I manage to check out that group of houses and still make it back to safety? Let’s try it.

The less fun part of Metal Gear Survive is the hunger and thirst meters. Put bluntly, they’re always low. Dying of starvation is a real risk in the early going. I’m the type of player that wanders away from the main and even side objectives constantly, and I repeatedly found myself, in a word, totally boned for resources. While that’s frustrating in one way, it motivated my creative side immensely. If I starved to death, how would I avoid that upon reloading? Focusing on base development and farming was ultimately my answer, but there are a bunch of ways to go about it. Annoyingly, you have to go to the inventory menu every time you’re hungry or thirsty (i.e. every few minutes). I realize the intention is to make survival feel challenging – and rightly so – but for the love of god give me a shortcut to drink water or eat food.

“For the love of god give me a shortcut to drink water or eat food.”

As you explore Dite, you’ll spend a big chunk of time gathering stuff. Breaking tables and oil drums to gather the wood and iron, punching sheep in the head to harvest their meat and leather, and filling up a ridiculous number of bottles with dirty water. Like other survival games, it’s tedious as hell but completely necessary. Early on, resources can be very scarce making crafting almost anything a challenge.

Doing almost anything also costs Kuban Energy, which you acquire by killing Wanderers or finding stashes of the stuff on the map. I didn’t often find myself short of Kuban, though you’ll want to invest heavily in character upgrades if you can. Sadly, the skill tree is uninspired and there weren’t many perks that I really wanted to pick up. 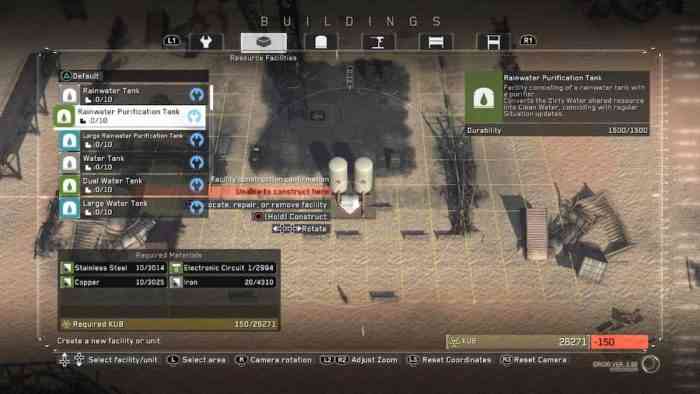 What it feels like the game wants you to do, is make some microtransactions. Using SV coins, you can pay for boosts to things. The game dishes out a few coins as login bonuses, but it would take a whole lot of logging in to make any significant difference. I don’t mind the option to pay for things in a lot of cases, but there are some egregious micros built into Survive. For one, the game only gives you one save slot up front. If you want additional characters, you’ll need to pony up ~$10 in SV coins. Konami is primarily engaged in the Pachinko business at this point and I expected some microtransactions, but it’s an exceptionally greasy implementation.

“I expected some microtransactions, but it’s an exceptionally greasy implementation.”

The good news is that there’s an alternative way to get ahead, and that’s by playing multiplayer. The co-op missions are the same thing you’ll end up doing a lot of in single player – using a Wormhole Digger to mine Iris Energy. In exchange for your effort, you’ll get gear drops you’d likely not find until much later in the single-player mode, as well as a lot of Kuban Energy. It’s fun a few rounds at a time, but it suffers from the same thing as the game at large does: it’s bloody repetitive.

Head out from Base Camp towards a waypoint. Gather supplies along the way. Reach the waypoint. Defend an object/person/area from Wanderers. Return home and talk to the Virgil AI. Cook and craft things. Repeat. That’s the loop in a nutshell. There’s absolutely nothing wrong with that, and for hours at a time, I’d be completely satisfied. The loot treadmill was rolling out things at a tolerable pace, and the base development aspects seemed to be going places. Eventually, though, fatigue got its hooks into me. I started approaching every encounter the same way because I found a system that worked, and the game didn’t provide much reason to go outside that comfort zone. Whereas in The Phantom Pain I’d try out the rocket fist because it sounded hilarious and dumb, Survive is devoid of those mad scientist moments. There are still lots of things you can do, but without the insane storylines and unbelievable flexibility of previous titles, there’s not much here to set Metal Gear Survive apart from the crowd. 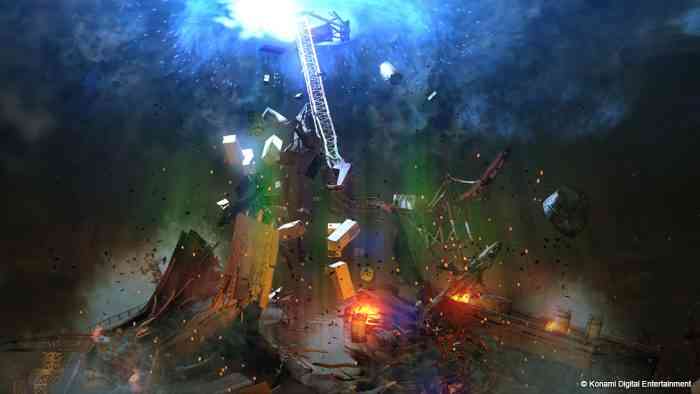 If you’re a fan of games like Rust and DayZ, you may well find that you love the hell out of Metal Gear Survive. It has lots of meters and things to craft, and an interesting navigation system that challenges the player. It also has a crushing amount of repetition, the slimiest of microtransactions, and it whiffs on anything but tangential connection to the main Metal Gear franchise. This is not Metal Gear Solid 6. If you can accept that fact with an open mind, you may actually like what you find.

Bloober Team and Konamic Enter Into A Strategic Partnership
Next Riftstar Raiders Review – Some Like it Hard
Previous The Seven Deadly Sins: Knights of Britannia Review – A Decent Service for Fans