Ghost of Tsushima Gets Black and White Mode

According to the Ghost of Tsushima creative/art director Jason Connell, the black and white mode the Sucker Punch team created had a major impact on the games development. The team had to change some things around with the game to create a perfect black and white mode, making it more than just a simple filter that can be applied to the feudal Japan world as if it were in photo mode. The black and white mode was recently showed off during a State of Play broadcast, showing off a Akira Kurosawa inspired visual masterpiece. Ghost of Tsushima is releasing exclusively for the PS4 on July 17th 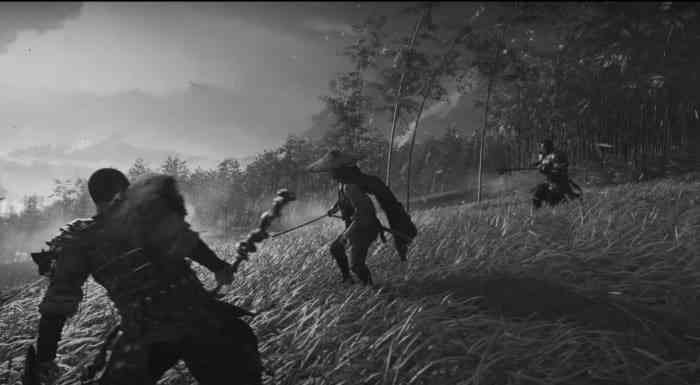 “There are definitely some things that are more challenging when you’re in that mode. Once we created that mode, and you can play the whole game through it, we quickly realized there were some areas that we need to reevaluate,” said Jason Connell. “Like, if we were using the same icon on the map but just using a different color, then that doesn’t work that well. So you have to change the shape of the second icon because the color alone won’t work.”

“And frankly, we take a lot of cues from learning from a colorblind accessibility mode. It effectively would be that for us,” Jason Connell continued. “We just put the mode on and play the game a ton and find out where it breaks and rework on the design. And that’s how we work in general about almost everything.”

Considering you can flick blood off your samurai sword with the click of a button in Ghost of Tsushima, it seems like the art team at Sucker Punch is focusing on an immersive experience and the addition of the black and white mode will further this immersion.Jason Connell also explained that Sucker Punch’s playtesting helped the developers ensure the game would be enjoyable whether players have color or not.

Will you be playing through Ghost of Tsushima in colour or black and white? Let us know in the comments below!