“We Will Never Truly Be the Community We Strive to Be”

Many publishers and developers are making statements and taking stances against racism lately. While they may be genuine and heartfelt, the irony is not lost on us that many of these companies make violent games that either amplify or do nothing about the issues that the United States has been facing for the last few hundred years. If you are skeptical of the honesty behind these messages, you are not the only one. Yesterday, loading screens in Call of Duty: Modern Warfare were replaced with Black Lives Matter messages from the developers. 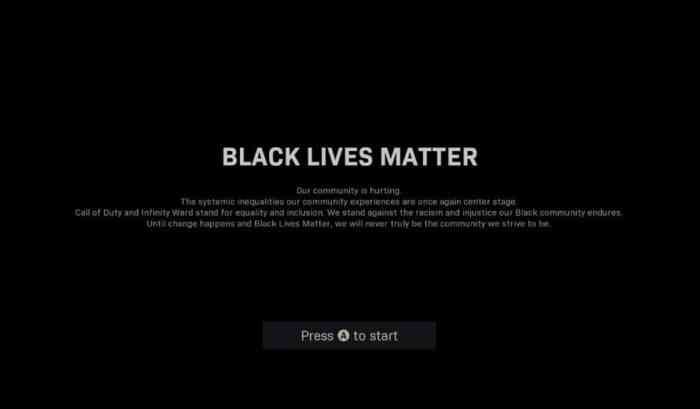 This screenshot comes from Reddit, where the thread containing the images had to be muted “to prevent more toxicity”. While the words are nice, the thread is immediately followed by two other threads of users capturing images and videos of players freely using the N word in their user names. If Infinity Ward is serious about making changes to the community culture, this shows that they have a lot of work ahead of them, and that they should have started this a long time ago. Black Lives Matter messages have been echoed by other developers in their games such as NBA 2K20.

Infinity Ward’s message concludes with “Until change happens and Black Lives Matter, we will never truly be the community we strive to be“, which couldn’t be more true, and there is a lot that they themselves can do to make changes. Let’s also not forget Activision Blizzard’s response to when pro Hearthstone player Blitzchung supported the protests in Hong Kong. What’s with the double standard? Call of Duty: Modern Warfare is out now on PC, PS4, and Xbox One.

What do you think Infinity Ward should do to combat racism in their own community? Let us know in the comments below.

Amsterdam Hotel Not Happy With Call of Duty: Modern Warfare 2
Next
Madden 21 on Xbox One Can Be Upgraded to Next Gen Until Next Year
Previous
A Collision of Genres: That Tiny Spaceship has a Demo Coming-Out This Summer