Developers at Ronimo Games have officially unveiled their next title which will be coming to early access later this year, Blightbound. The Awesomenauts developer is creating the dungeon crawling fantasy title for Steam early access specifically but there’s been no date set by Ronimo Games, so gamers can expect to see it sometime in 2020. Publisher Devolver Digital continues to support quality indie titles and Blightbound looks to continue that trend as 2020 comes to a close. Exit the Gungeon was recently released by Devolver Digital for iOS, PS4, Xbox One, Nintendo Switch and PC, which gamers can check out while they wait for Blightbound early access. 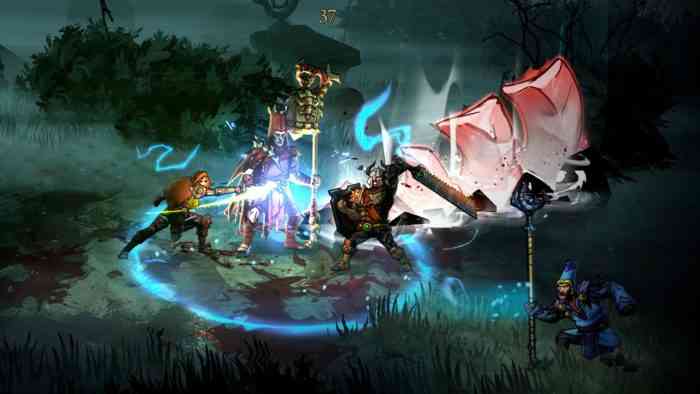 Ronimo Games is the team behind Awesomenauts but Blightbound looks to be taking the developer through a new genre. The blight is unleashed when heroes defeat the Shadow Titan who unleashes the Blight in a Pandora’s box situation. Dungeon crawling is nothing new and gamers can choose between the familiar Warrior, Mage and Assassin archetypes when it releases for Steam early access. The title will have local and online co-op support, allowing dungeon crawlers to recruit their friends for help as they explore the blight covered world of Blightbound.

The dungeons gamers will crawl through in Blightbound are handcrafted and each of them will have progressively better loot to discover. As gamers defeat the blight that has taken over the world, they’ll eventually unlock over 20 heroes to play with. Unlocking more heroes to play as will increase the replayability of this dungeon crawler, with each character offering their own play style and unique abilities. The mountain refuge can be upgraded over time to allow for crafting, bounties and more facilities which will open up.

Will you be checking out Blightbound’s Steam early access later this year? Let us know in the comments below!